Dark Season 3 First Reviews Out: Critics Tag it as One of the Best Finales You Can Have For a Show

Dark season 3 will start airing on Netflix from June 27 and until then, read what critics have to say about its new and final season. 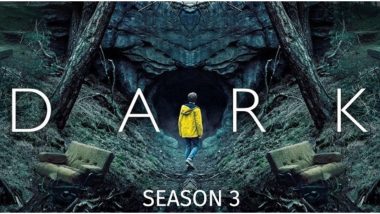 Netflix's German series, Dark, justifies its title in every possible way. The season that deals with time travelling and other nerdy science-fiction stuff will return on the OTT platform for its third and final season and expectations for which are already sky-high. And while we continue to wait for June 27, few lucky ones on this planet had an opportunity to watch it beforehand and if their reviews are to go by then season 3 is worthy of all the time that you'll invest in watching its eight episodes. Netflix's Dark Season 3 Trailer Is Out and Twitterati Is Freaking Out! (Watch Video).

Pramit Chatterjee from Mashable India writes, "I was thinking of the number of ways I could’ve fu*ked the final season and it was in triple digits. But Odar doesn’t. He always stays true to what the show means no matter how absurd and outright bonkers the theories, the plot, and the science gets. He places the humans in the story first. Their trials, their tribulations, their hesitations, their dreams, their fears, captured in such minute detail that you cannot help but feel for them. He makes you wish that they never got into the mess they’re in."

Patrick Cremona from RadioTimes writes, "There’s a sort of fatalistic helplessness that pervades much of the series, which can make it a little, well… dark, to watch at times, and it deals with some weighty themes that ensure you’ll have to pay close attention (it’s certainly not something to casually have on in the background). But this is science fiction at its most mesmerising, its most confounding and its most exhilarating – and it all makes for a truly irresistible piece of television." Netflix Drops Dark Season 3's Final Trailer And It Only Makes The Wait For June 27 More Unbearable (Watch Video).

Dark as a series has its own niche following and the followers are currently waiting for the "apocalypse" to happen. With so many things at stake and of course, the emotional and mental rollercoaster that we went through in its past two seasons, it suffices to say that season 3 won't disappoint. Well, at least the initial reviews have come in positive, so let's hope for the best.

(The above story first appeared on LatestLY on Jun 25, 2020 01:46 PM IST. For more news and updates on politics, world, sports, entertainment and lifestyle, log on to our website latestly.com).