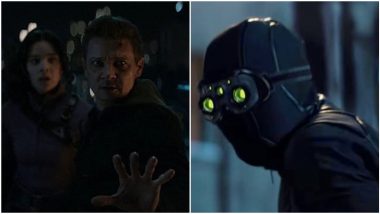 Hawkeye Episode 4 Review: Okay, for those who have not seen the episode yet, and are planning to do so. there are some MAJOR SPOILERS ahead. Let me start off with the first one. The cameo that I mentioned in the headline is not the much-awaited entry of Vincent D'Onofrio as Kingpin, which I believe would happen in the next episode. Also, as some of the rumours were going on social media, the fourth episode of Hawkeye doesn't have any post-credit scene. It does have a cameo, and that's someone you know would arrive even before Hawkeye began streaming. Hawkeye Episode 4 Recap: From Black Widow to the Secret Rolex Watch, 6 Plot Twists From the Fourth Episode of Jeremy Renner’s Disney+ Show.

Before we get to that person, let me share some thoughts about Hawkeye's fourth episode that did leave me a little unimpressed. Especially after that terrific third episode. As a series, Hawkeye has been very uneven; there are some nice moments, but the overall impact doesn't seem to be veering towards 'great stuff'! I also felt that Jeremy Renner wasn't very keen in his performance, though Hailee Steinfeld was just too good.

The third episode changed my opinion. Echo aka Maya Lopez's (Alaqua Cox) intro was well-done, the whole chase-sequence was fantastic, and Renner really sold me in the scene where he tries to speak to his son on the phone. And now we are in the fourth episode, ah well, Hawkeye again went for the the low on the curve.

Watch the Opening Scene of Episode 4:

Renner's performance once again felt he was uninterested, despite the sequences where he was kept reminding of his deceased BFF.  Kate Bishop has now started grating on the nerves. I have no clue why the makers want to make a 22-year-old act like a teenager; Peter Parker has already done that shtick. The opening sequence that places Kate and Clint in an awkward conversation with her mother and her suspicious fiance is sillier than it is supposed to be. The scene where Clint bares his heart a bit to Kate, including she realising he is Ronin, is effectively emotional. We also learn that Laura Barton does help Clint out with some of his spy work, and she is fluent in German; hope that comes in handy in the later episodes. Hawkeye Episode 3 Review: Alaqua Cox as Maya Lopez aka Echo Leaves a Mark in Jeremy Renner, Hailee Steinfeld's Marvel Series.

Pace picks up in the third act of the episode when Clint and Kate track the missing Rolex watch from the destroyed Avengers compound to a flat, but Kate's cloying behaviour does irk you once again. Then comes a couple of surprises that would have been really good, if the fight-choreography that was so fantastic in the previous episode also extended the same quality here. The four-way fight between Hawkeye, Kate, Maya and a mysterious person is what is a modded night-monkey suit that Parker used in Far From Home should have been really amazing. The fact that it isn't is quite the downer, especially the reveal that the suited person is none other than Yelena, played by Florence Pugh reprising her character from the Black Widow movie. It should have been mind-boggling, but apart from the 'uh, she?', I am not sure her sudden appearance would elicit a more stunning reaction. The sequence's treatment of Maya is even more annoying; she hardly makes any impact. BTW, did this particular scene set up the platform for a Young Avengers series or movie?

One moment that catches you in the fight scene is when it recalls Black Widow's death, which is why you know why Clint wants nothing to do with Kate anymore. The episode ends with Clint telling Kate to stay away from him, which is something you know would come any moment. Though, wasn't he still in New York to protect her from the Tracksuit gang? How does staying away would help in that cause?

Personally, I felt that while it had a couple of nice moments, the fourth episode of Hawkeye was a letdown, despite that cameo, especially when you compare it with the stupendous third episode. Fingers crossed that the final two episodes go better than this. Hawkeye is streaming on Disney+ Hotstar.

(The above story first appeared on LatestLY on Dec 08, 2021 05:35 PM IST. For more news and updates on politics, world, sports, entertainment and lifestyle, log on to our website latestly.com).