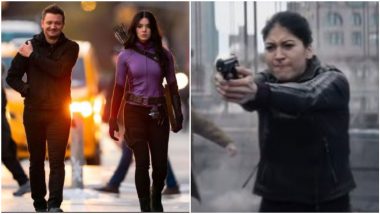 Hawkeye Episode 3 Review: The last scene of episode 2 of Hawkeye showed us the first glimpse of Alaqua Cox as Maya Lopez, a Native American Marvel character who is deaf. She later becomes the superhero Echo, though when we meet her in Hawkeye, she is a villain, or rather the leader of the mercenary Tracksuit Gang. And what's more, she has a painful vendetta against Ronin, whose identify she hasn't yet managed to figure out. Hawkeye Review: Hailee Steinfeld Adds Occasional Doses of Fun to Otherwise Okayish Opening Episodes of Jeremy Renner’s Marvel Series.

At the present, she has both Clint Barton and Kate Bishop in her hold, and Clint insists that Ronin is killed, that too by Black Widow. Not that Maya believes him, and she thinks it's Kate. In a way, what Clint is saying is true, it was Black Widow's persistence that made a then depressed Clint to drop his murderous Ronin persona and help the Avengers with their time travel heist. But old wounds don't exactly heal fast, and the murders that Clint did as Ronin are not going to let him have peace. He did piss someone at the top of the organised mob pyramid, and we really want to believe that is Kingpin.

Anyway, I quite like the third episode, which I found to be a big improvement over the previous two ones. The opening sequence that shows Maya's childhood and her bonding with her father William (Zahn McClarnon) play nicely, at least in making us feel for her character, and her grit.

The action also improves in the episode, from Clint fighting Maya and her men in their hideout that spills to that very exciting and well-shoot chase sequence across New York city, where we get to see more of Hawkeye's trick arrows, including some old ones like his USB arrow and his plunger one.

I also loved the sequence, when Clint talks to his son on the phone after having damaged his hearing aid. It is a pretty good emotional moment, sold well on Renner's acting chops. Hawkeye: Jeremy Renner Opens Up About His Character in the Disney+ Hotstar Series.

While a quite fun episode, there were a couple of issues that did bother me. First was the frequent intrusion of MCU's quippy humour that does bring down the tension in a crucial sequence. Secondly, the equation between Maya and her fellow Tracksuit member Kazi (Fra Free) reminded me of that between Karli Morgenthau (Erin Kellyman) and Nico (Noah Mills) in The Falcon and the Winter Soldier. Hope Hawkeye doesn't take their arc through the same route, though we know by now, Maya is getting her own Disney+ series, Echo, so she will survive this.

Hawkeye gets more engaging, interesting and exciting with the inclusion of Maya and a couple of fun action beats. A little trepidation comes from Marvel threatening to go down a very familiar path. The first three episodes of Marvel's Hawkeye is streaming on Disney+ Hotstar.

(The above story first appeared on LatestLY on Dec 01, 2021 03:26 PM IST. For more news and updates on politics, world, sports, entertainment and lifestyle, log on to our website latestly.com).