Hawkeye is a Marvel Disney+ show that streams every Wednesday on Disney+ Hotstar at 1:31pm. It stars Jeremy Renner as Clint Barton/Hawkeye who is joined by Hailee Steinfeld's Kate Bishop. 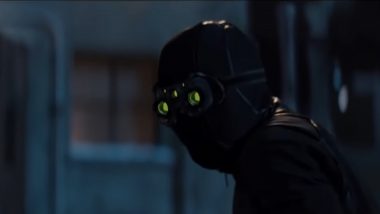 As we gear up towards the end of the show, the fourth episode of Hawkeye had a bunch of interesting twists and turns. With two more episodes left to go now, Hawkeye’s fourth episode sees Clint find out the CEO of the Tracksuit Mafia’s while trying to retrieve a watch that’s important to someone he knows. We also see a familiar face pop up towards the end of the episode that is surely going to get a bunch of fans excited. Hawkeye Episode 3 Teases Wilson Fisk Aka Kingpin; Marvel Fans Waiting in Excitement To See Vincent D’Onofrio in Jeremy Renner, Hailee Steinfeld’s Series.

Given that we have officially entered the final half of the season, we can surely expect some twists and turns from Hawkeye. The show till now has kept us on the edge of our seats and has slowly been revealing secrets now and then. With episode 4, we get a bunch of new secrets revealed. So let’s take a look at all the spoilers from the fourth episode of Hawkeye.

After Jack pulls the Ronin sword on Clint, Eleanor comes out and is startled seeing an Avenger in her house. Jack, Clint, Eleanor and Kate gather in the living room as they discuss exactly what is going on. Clint and Kate explain and just as Clint is about to leave, Eleanor stops him and talks to him about keeping Kate safe. After Clint leaves Eleanor makes a phone call to someone saying it's urgent, hinting that there is something larger at play here.

Jack is Helping the Tracksuit Mafia

Turns out Kate was right to no one’s surprise. After leaving the Bishop apartment, Clint asks Laura to do some digging around Sloan LTD, only to find out that Jack is the CEO. Apparently Jack is helping out the Tracksuit’s by laundering money for them and the man behind the organisation, which we all have an idea of who he might be.

Clint Reveals He Was Ronin

After a good bonding session filled with Christmas delight, Kate and Clint have a serious conversation. He tells Kate about Natasha and Kate figures out that he was Ronin all along. In what was a really sweet and heavy scene, it was great to see Marvel fully give into that tone and not undercut it with a joke.

Clint meets up with Kazi and tells him to convince Maya to back off. She is chasing a ghost and will never find out who Ronin actually is. Clint talks a bit more about the “big guy”, but guess we will have to wait until next week’s episode to find out who that is.

Turns out the Rolex Watch wasn’t destroyed at the Avengers compound. Who exactly it belongs to is still a mystery but their identity was hinted at. Looks like it might be one of the Avengers who might have retired now. Who’s apartment it was in though causes a lot of trouble as it turns out it was Maya’s house after all. This leads to a skirmish between Maya and Kate while Clint fights a skilled stranger on the terrace of the next building. Hawkeye: Jeremy Renner Opens Up About His Character in the Disney+ Hotstar Series.

Florence Pugh makes her return as Yelena Belova. It’s a continuation from the post-credits scene of Black Widow where she is sent to hunt Hawkeye and looks like she is trying to fulfil her mission here. She disappears as Clint and Kate are able to get an upper hand on her. This causes Clint to cut Kate off and the episode ends.

Hawkeye streams every Wednesday on Disney+ Hotstar at 1:31pm.

(The above story first appeared on LatestLY on Dec 08, 2021 03:48 PM IST. For more news and updates on politics, world, sports, entertainment and lifestyle, log on to our website latestly.com).