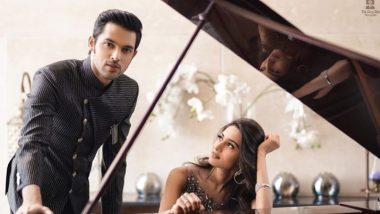 It's a bad time for Kasautii Zindagii Kay 2. After the show resumed irs shooting, Karan Singh Grover, who played Rishab Bajaj refused to return to the show because of COVID-19 and was replaced by Karan Patel. This was followed by lead actor Parth Samthaanc contracting COVID-19, which forced the show to shut down for a few days until his other co-actors' tests were conducted, which fortunately turned up negative. And now, barely a few days after his return, Parth has reportedly put down his parers and is all set to quit the show. And if the latest reports are to be believed, then following in his footsteps is co-star Erica Fernandes. Kasautii Zindagii Kay 2: Parth Samthaan aka Anurag Basu To Quit Ekta Kapoor’s Show?.

If India TV reports are to be believed, then Erica Fernandes is also contemplating quitting the show as she has 'better prospects' in hand. The report can also be quoted as saying, "Due to the COVID19 pandemic, Erica was shooting alone from her house, considering her health and safety precautions. She had recently resumed shooting on the sets and had moved out of her family house. She had said that her father has had four heart attacks, while her mother has a history of TB, which is why she doesn't want to take any risks." Erica Fernandes Resumes Shooting for Kasautii Zindagii Kay 2; Reveals She Has Moved Her Parents Into a New House to Keep Them Safe (Details Inside).

Well, while only Erica can confirm on deny these rumours, there is gossip that makers have already started looking for a replacement for Parth after even Ekta Kapoor couldn't convince him to stay put as Anurag. We wonder what PaRica fans have to say about this?

(The above story first appeared on LatestLY on Aug 15, 2020 07:08 PM IST. For more news and updates on politics, world, sports, entertainment and lifestyle, log on to our website latestly.com).