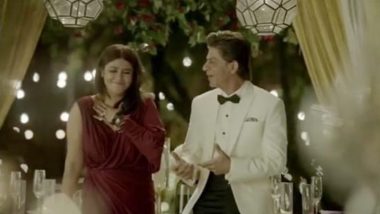 Kasautii Zindagii Kay 2 is literally on everybody's minds right now. Ever since Ekta Kapoor the reboot of the popular original show, fans have been eagerly waiting for it. We are looking forward to the new-age Prerna and Anurag on the small screen yet again. Ekta recently released a new promo of Kasautii Zindagii Kay 2 with Shah Rukh Khan in it. She also announced that the show will air from 25th September 2018 instead of 10th September 2018. We already saw a glimpse of Erica Fernandes as the new Prerna in the first promo of the show. Parth Samthaan will be playing Anurag Basu with Hina Khan playing the role of Komolika.

The cast and crew have already started shooting for the show. Pictures of Erica and Parth from the sets of Kasautii Zindagii Kay 2 went viral on the internet a couple of days back. But coming back to Shah Rukh Khan being a part of Kasautii Zindagii Kay 2, Times Now reported that King Khan apparently charged a whopping sum of Rs. 8 crore to shoot for the promo of the show. In addition to that, the portal also reported that SRK will be promoting his show Ted Talks on Ekta's show. SRK also spent a couple of hours more to record the narratives for the show, which he was roped in for. He spent around 720 minutes for the entire shoot, charging Rs 1. 11 lakh for a minute, as per sources.

Check out the Ekta and SRK special promo if you haven't already!

It was earlier reported that Hina Khan is the highest paid actress on Kasautii but King Khan definitely beat her to it. What are your thoughts on this? Tell us in the comments below and stay tuned with us for more.

(The above story first appeared on LatestLY on Aug 27, 2018 06:13 PM IST. For more news and updates on politics, world, sports, entertainment and lifestyle, log on to our website latestly.com).