Khatron Ke Khiladi Made In India: Bharti Singh Roped In As Wildcard Contestant; To Re-Unite With Husband Haarsh Limbachiyaa (Deets Inside) 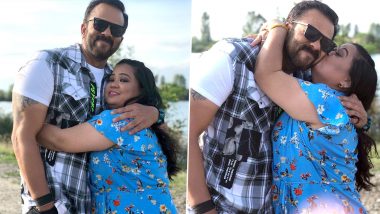 Comedienne Bharti Singh and husband Haarsh Limbachiyaa made quite the impression on us when they participated in Khatron Ke Khiladi 9. From Bharti performing stunts in an amazing manner to Haarsh quitting as many stunts as possible to the duo making us laugh and cry equally, the couple came as a complete entertaining package in KKK9. And with the Fear Factor makers coming up with a champion version of Khatron Ke Khiladi where previous season's best performers have been roped in to compete for the 'Champion's Jacket', the makers have decided to cash in on Bharti's fun and game and also her super compatible rapport with Rohit Shetty and brought her on board for Khatron Ke Khiladi: Made In India. Khatron Ke Khiladi: Made In India: Farah Khan Steps In As Interim Host of Rohit Shetty's Adventure Reality Show (Deets Inside).

As per reports in Bombay Times, Bharti will be joining the team alongside Rohit Shetty, i.e. from the third episode and will be introduced as a wildcard. She will be seen reuniting with her KKK9 gang Aly Goni, Jasmin Bhasin and hubby Haarsh Limbhachiyaa. For those still unaware, Rohit Shetty's prior work commitments have forced the director and host to miss the first 2 episodes of the show with Farah Khan replacing him in the interim. Khatron Ke Khiladi Special Edition: Hina Khan Opts Out Due To 'Safety Reasons', Sidharth Shukla Was Never Approached (Deets Inside).

A source told the daily, "Not just viewers, Bharti charmed everyone on the set, too. She is a true entertainer and had everyone in splits during her stint on ‘KKK’. Now, when the makers have brought back popular celebs from previous seasons, the special edition would have looked incomplete without her. Besides, Rohit shares a warm equation with Bharti and their chemistry on the show was the USP of the ninth season. She will join the show once Rohit is back to host it." Well, this development has only made KKK: Made in India an even more appealing one, hasn't it?

(The above story first appeared on LatestLY on Aug 01, 2020 10:59 AM IST. For more news and updates on politics, world, sports, entertainment and lifestyle, log on to our website latestly.com).