Mahira Sharma To Approach The Cyber Crime Cell Over Shehnaaz Gill's Fans Trolling Her, Says 'No Contestant’s Fans Have Done That So Far'

Well, looks like Shehnaaz Gill needs to have a word with her fans about crossing lines and shaming her industry contemporaries, who are also established names. 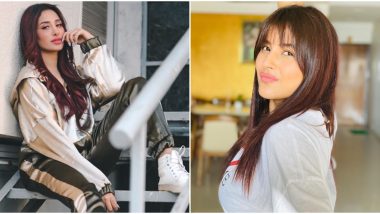 Mahira Sharma and Shehnaaz Gill, who were once close friends inside the Bigg Boss 13 house, can not see eye to eye now. While there is no catfight brewing between the ladies, both of them have made it evident that there is no love lost between them and refrain from speaking about one another in the media. It can be recalled that the two had a common bone of contention in the name of Paras Chhabra. He was first friends with Shehnaaz Gill, but he eventually moved on to Mahira Sharma and all hell broke loose. Mahira Sharma Opens Up On Allegations of Donating Food for Publicity, Says 'It's Convenient to Sit Infront of Social Media and Monitor and Judge Others'.

However, the drama surrounding the ladies has simmered again. Recently, it was reported that Mahira Sharma has been paying money to Shehnaaz Gill's fan pages on social media and various screenshots were circulated. But in a conversation with TOI, Mahira denied the allegations and revealed that she was contemplating approaching the Cyber Crime Cell with regards to the issue. It’s Official! Bigg Boss 13 Fame Paras Chhabra and Mahira Sharma Confirm Doing a Film Together.

Mahira revealed, "It started a couple of days ago and I learnt about it through social media. A lot of people, including some small-time YouTubers have reported that I tried to buy Shehnaaz’s fan pages. They have been tagging me on such news and reports. I thought of avoiding it initially, but now, things have come to a head. To begin with, they have no proof to substantiate their claims. Why will I buy anyone’s fan pages?" Shehnaaz Gill Opens On How The Ones Who Rejected Her Are Keen On Collaborating With Her Now (Deets Inside).

She continued, "This fake news is being circulated to malign me. They are trolling me and it’s being done on purpose. I don’t know who is behind all of this. If I had to spend money, I would rather invest in a team that handles my social media accounts. I don’t want any negative publicity. I am not even active on social media. So, there is no need for me to buy anyone’s fans. It’s so bizarre to claim that I called random people to approach Shehnaaz’s fans to get me her fan pages. Isn’t it crazy? It’s not as if someone else’s fans will start liking my work over their favourite celebrity. I am happy with my fans and am proud of them. They don’t abuse or troll anyone. Main aise fans toh chahungi nahi ki woh kisi aur ko troll karein, because Shehnaz ke fans bahut abuse karte hain," said Mahira. Shehnaaz Gill On Himanshi Khurana: 'I Don't Know Why She Unfollowed Jassie Gill, I Don't Have Any Competition Against Her'.

However, the lady is clear on her stand that she bears no hard feelings for Gill. "Shehnaaz and I don’t have any problems. At least, I don’t have any from my side. I had met her during an episode of ‘Mujhse Shaadi Karoge’, but I have not been in touch with her since. I have always spoken well about her, even when I was asked about her video with Sidharth. I believe in focusing on my work rather than talking about others, she said.

She also added, "I would expect everyone’s fans to maintain decorum on social media, as their behaviour also reflects on the celebrity they are cheering for. Shehnaaz has worked hard to reach where she is today. By trolling someone else, you tarnish the reputation of your favourite celebrity, too." Devoleena Bhattacharjee Gets Death Threats From a Fan of Arhaan Khan, Bigg Boss 13 Contestant Urges Mumbai Police and Cyber Cell to Take Action (Read Tweet).

She now plans to approach the Cyber Crime Cell to put an end to the social media menace caused by the fandom and said, "Yes, I am planning to approach the cybercrime cell. I don’t want fans to fight among themselves. They (Shehnaaz’s fans) have been trolling me since ‘Bigg Boss 13’ ended. Real fans won’t do it, only fake ones and those with ill intentions will do it. You get to know how many of them are genuine by just reading their posts and comments. I don’t have fake followers and I challenge anyone to debunk my claim. The trolling and nasty comments haven’t stopped. Now, they have started targeting my family. So, I will have to take action. It’s been traumatising for my mother and me to read such messages every morning."

Well, looks like Shehnaaz Gill needs to have a word with her fans about crossing lines and shaming her industry contemporaries, who are also established names. A few weeks back, Devoleena Bhattacharjee had lodged a complaint at the Cyber Crime Cell against a 'supposed' Shehnaaz Gill fan for posting a filthy audio clip targeting the actress and her mother after Devoleena said that she did not see any chemistry between Gill and Sidharth Shukla in their music video "Bhula Dunga".

(The above story first appeared on LatestLY on May 21, 2020 10:41 AM IST. For more news and updates on politics, world, sports, entertainment and lifestyle, log on to our website latestly.com).