Nach Baliye 9: Prabhas Pulls Off a Salman Khan as He Dances With Raveena Tandon on Jumme Ki Raat (View Pics) 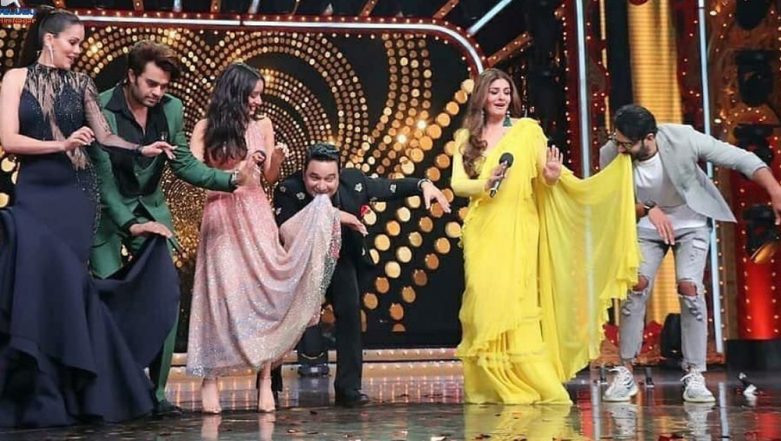 Prabhas and Shraddha Kapoor are making sure that their upcoming film, Saaho reaches a wide audience. The south superstar was in Mumbai to promote this Sujeeth directorial extensively. He also recently graced the sets of dance-based reality show Nach Baliye 9 along with Shraddha. The pictures going viral are a proof that he had a blast here along with judges Raveena Tandon and Ahmed Khan. In fact, in a viral pic, we can see Prabhas pulling off the signature Salman Khan hook step from the song "Jumme Ki Raat" (Kick). Saaho: Prabhas’ 70-Foot-Tall Cut-Out Installed Outside Ramoji Film City, Hyderabad by Fans of the Actor (View Viral Pic).

He and Raveena are seen dancing on the song, where he held her pallu and did the hook step. Hosts Manish Paul and Waluscha De Souza also imitated the same and so did Ahmed and Shraddha. Not to forget, Raveena once again wore the yellow saree and looked absolutely stunning in the episode. Check out the pictures below.