Sidharth Shukla died on September 2, leaving his fans devastated. And to celebrate the actor's legacy, here are some of his best roles from TV and Bollywood. May his soul RIP. 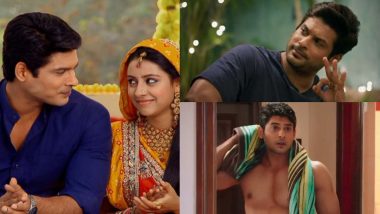 Bigg Boss 13 winner Sidharth Shukla is no more. This shocking news has shaken the film industry as he was just 40. Reportedly, the television actor died due to cardiac arrest in Mumbai. As soon as this news broke, fans, as well as his friends from the industry, mourned the loss. The actor was known to be a charmer as well as an opinionated person in reel as well as real life. In his career so far, he has ruled the TV space for a long time and after winning BB 13, he proved there's no one like him. It's sad that he is gone, but to celebrate his legacy, let's take a look at his best roles until now. Respect Sidharth Shukla and Stop Tweeting This Fake Old Viral Clip from a Gym as Video of the Actor's Death Caught on Camera.

In 2012, Sidharth was roped in as Shivraj Shekhar in Balika Vadhu opposite Pratyusha Banerjee and later Toral Rasputra. His portrayal as Shiv on the Colors TV show is still remembered by fans. He quit the show in 2015, when his character died fighting with terrorists.

This show became famous as it saw Sidharth Shukla and Rashmi Desai for the very first time in one frame. He essayed the role of Parth Bhanushali in Dil Se Dil Tak where he played a doting husband. The serial was inspired by the Bollywood movie, Chori Chori Chupke Chupke. It also starred Jasmin Bhasin, as the surrogate mother. Sidharth Shukla Dies of Cardiac Arrest in Mumbai - Reports.

After many rumours, when the Bigg Boss 13 winner was announced as the male lead opposite Sonia Rathee in Broken But Beautiful 3, fans were on cloud nine. In the series, he played determined and courageous Agastya Rao who happens to be a struggling theatre writer-director with attitude and falls for Rumi played by Sonia.

It was in 2014 when Shukla made his Bollywood debut as Angad Bedi in Humpty Sharma Ki Dulhania. He played the role of an NRI doctor and fiancé of Alia Bhatt. His role grabbed attention and also won him the Breakthrough Supporting Performance (Male) title in the Stardust Awards 2015.

That's it! These were some of the memorable roles of the actor which will forever be fan favourites. Having said that, only a few know that Sidharth Shukla had made his acting debut with a lead role in the television show Babul Ka Aangann Chootey Na on Sony TV. May his soul IP.

(The above story first appeared on LatestLY on Sep 02, 2021 01:09 PM IST. For more news and updates on politics, world, sports, entertainment and lifestyle, log on to our website latestly.com).