A video from a gym is doing rounds on social media which claims to be the last moments of Sidharth Shukla before he died. The clip is absolutely FAKE and not to be trusted at all. 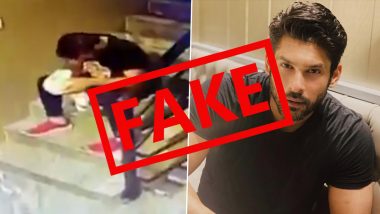 Television star Sidharth Shukla passed away on September 2. This news was a shocker to fans as well as industry wallahs because no one was able to believe that it was true. But sadly, Sid is no more and died of a heart attack in Mumbai. As soon as there was an official confirmation of this, the internet started to mourn the loss of the Bigg Boss 13 winner. However, amid this saddening situation, there's a section of people on social media who were indulged in unethical practices. Siddharth Shukla Dies of Heart Attack; Manoj Bajpayee, Armaan Malik, Ashoke Pandit and Others Mourn the Loss of Bigg Boss 13 Winner.

As a video has been released online, where a man could be seen collapsing and dying after drinking something from a bottle. The clip is from a gym and is being circulated as Sidharth Shukla's last moments before he died. If you take a closer look at the comments on the video, many have slammed the page for sharing a fake video. This is extremely wrong and gross. Sidharth Shukla Dies of Cardiac Arrest in Mumbai - Reports.

The caption of the fake video reads, "Actor #SiddharthShukla Dies Of an Heart Attack. Confirmed by Cooper Hospital. Om Shanti." Well, with an aim to churn views on the page, looks like the admin has done this. Such acts need to be reported. Lastly, may Sidharth Shukla's soul RIP.

(The above story first appeared on LatestLY on Sep 02, 2021 12:45 PM IST. For more news and updates on politics, world, sports, entertainment and lifestyle, log on to our website latestly.com).