CBSE Files FIR Against Website For False News on JEE

The website also published the model paper it said was from the academy and asked the readers to judge the claim for themselves. 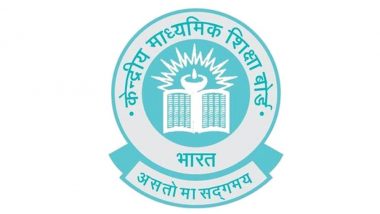 The logo of the Central Board of Secondary Education (Photo Credits: cbse.nic.in)

New Delhi, April 12 :  The CBSE has filed a police complaint against a website for publishing false news and spreading rumours that a number of questions in the JEE (Main) examination were lifted from a model paper prepared by a coaching institute, an official said on Thursday.

JEE (Main) Examination was conducted by the Central Board of Secondary Education (CBSE) on Sunday at 1,621 centres across the world for about 10.43 lakh registered candidates. The exam is a qualifying stage followed by JEE (Advanced) taken by aspiring engineering students to secure admission in colleges across the country.

In its complaint, the Board has taken issue with 'cisthetaglobal.com' for publishing an article which surmised that about seven-eight questions in the entrance exam paper may have been copied from a practice paper issued in 2016 by Narayana Coaching Academy.

The website also published the model paper it said was from the academy and asked the readers to judge the claim for themselves.

"While it is established that the news about JEE (Main) 2018 questions being identical to 2016 mock test is completely baseless and circulated to damage the image of the board, CBSE has taken serious cognizance of the situation and filed a written complaint for lodging FIR against the website owner of cisthetaglobal.com with the DCP (Crime) Delhi Police Headquarters on April 11," the Board said in a statement.

The Board had also issued a disclaimer on the same day against the rumours of questions being copied, saying they were "originally written only about two to three months back" and thus "cannot and could not have figured in any model paper by any coaching institutions two years back".

The website's owner, the Board said, refused to take any responsibility of the material, conceding that the images and content were not verified by it.

"This argument is completely unacceptable to CBSE as this callous and irresponsible attitude of the owners has caused undue anxiety and doubt in the public mind with regard to the credibility of CBSE and the JEE (Main) Exam which is also a gateway for admission to IIT Advanced examination," the CBSE said.

"The spokesperson of Narayana Coaching Academy has also informed the CBSE that the images displayed on the website are not of their Coaching Academy. According to the Academy, this is fake, baseless and fabricated," it added.

(The above story first appeared on LatestLY on Apr 12, 2018 04:24 PM IST. For more news and updates on politics, world, sports, entertainment and lifestyle, log on to our website latestly.com).