The Supreme Court on Thursday queried Maharashtra Chief Minister Eknath Shinde's counsel, that 'if completely ignoring political parties after being elected, is it not a danger to democracy?' 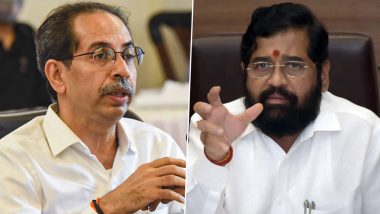 New Delhi, Aug 4: The Supreme Court on Thursday queried Maharashtra Chief Minister Eknath Shinde's counsel, that 'if completely ignoring political parties after being elected, is it not a danger to democracy?'

Shinde's counsel submitted that his client is not disqualified, and he has also not left the party, and emphasized on the aspect of dissent within a political party. Sanjay Raut’s ED Custody Extended Till August 8 in Patra Chawl Land Case

Senior advocate Harish Salve, representing Shinde, submitted that disqualification under the Tenth Schedule of the Constitution takes place, only if the Speaker reaches a conclusion that a member has voted against the stand of a party. Salve added that if the Speaker of an Assembly takes one or two months to decide on disqualification pleas against MLAs, then what does this mean? That they should stop attending the proceedings of the House? He further added, "There is no per se illegality principle, until and unless there is a finding of disqualification..."

A bench headed by Chief Justice N.V. Ramana and comprising Justices Krishna Murari and Hima Kohli said, "What is the use of whip then? Does anti-defection apply to only those things?"

Salve replied that the anti-defection law cannot be an anti-dissent law.

The Chief Justice queried, if completely ignoring political parties after being elected, is it not a danger to democracy? Justice Ramana further queried "You say this court and high court should not hear this and this is after you had approached us first."

Salve said that in facts of this case, there is nothing to show that these people left the party. The Chief Justice told Salve, "Today you say the court can't go into the issue...because the Speaker has the power". Salve said, "I am not disqualified, I have not left the party..."

Senior advocate Kapil Sibal, representing the Uddhav Thackeray faction, submitted that there was no need to refer the issue to a constitution bench.

Senior advocate Abhishek Manu Singhvi, also representing the Thackeray group, said that till this court decides, how can Election Commission decide this issue, and later they would say that these proceedings are infructuous?

Senior advocate Arvind Datar, representing the Election Commission, submitted that disqualification of rebel MLA means their disqualification from the House, not from the political party. Datar added that this is not a political issue and the Tenth Schedule cannot interdict this. "I can only decide who can have the symbol after the evidence is adduced," said Datar.

After hearing arguments, the top court orally asked the Election Commission of India to not take any precipitative action on the claim raised by the Shinde group for recognising them as the real Shiv Sena party in the meanwhile, and allow Thackeray faction to submit their response. The top court said it will decide by Monday whether to refer to a larger bench regarding the constitutional questions involved in the disqualification of MLAs arising from the Maharashtra political scenario.

(The above story first appeared on LatestLY on Aug 04, 2022 03:03 PM IST. For more news and updates on politics, world, sports, entertainment and lifestyle, log on to our website latestly.com).