Cyclone Tauktae To Hit Indian West Coast: Here's How The Cyclonic Storm Got Its Name And What it Means

The next few cyclones will be named Burevi (Maldives), Tauktae (Myanmar), Yaas (Oman), and Gulab (Pakistan) as per the new list of tropical cyclone names adopted by the member countries. 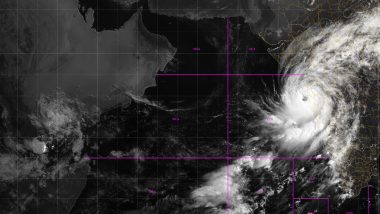 New Delhi, May 13: India is likely to witness its first cyclonic storm of the year by May 16, with the India Meteorological Department (IMD) predicting its formation over the East Central Arabian sea. The IMD has also issued alerts for heavy rainfall along the western coast. Potentially the first cyclonic storm of the year, Cyclone Tauktae, is taking shape in a low-pressure area on the east-central Arabian Sea, which would intensify and hit the coast of Gujarat over the next 10 days, weather forecasters at the India Meteorological Department said.

Last year, India had witnessed two cyclones by May named Amphan in the Bay of Bengal, and Nisarga in the Arabian Sea. The names of these tropical cyclones over the north Indian Ocean are not repeated once they are used. This means, once the name from the list is used, they cease to be used again. Thus, the name should be new and it should not be there in the already existing list of any of the RSMCs worldwide including RSMC, New Delhi. Cyclone Tauktae Live Tracker Map: Track Realtime Path of Low Pressure Area Forming in Arabian Sea Which May Intensify Into First Cyclonic Storm of 2021.

The word 'Tauktae' is a Burmese word, suggested by Myanmar. It signifies a lizard known for its distinctive vocalizations. The name is the fourth from a new list of 169 names released by the IMD last year. Last year’s Amphan was the name used from the list which was suggested by Thailand in 2004, while Bangladesh suggested the name for cyclone Fani that pounded the Odisha coast in 2019, meaning snake's hood.

Across the world, cyclones are named by regional specialized meteorological centres (RSMCs) and Tropical Cyclone Warning Centres (TCWCs) in the regions of their formation. There are six RSMCs in the world, including the IMD, and five TCWCs.meaning. Based on the list, the next few cyclones will be named Yaas, Gulaab, Shaheen, and Jawad.

How are Cyclones named by member countries?

- The proposed name should be neutral to politics and political figures, religious believes, cultures and gender.

- Name should be chosen in such a way that it does not hurt the sentiments of any group of population.

- It should not be very rude and cruel in nature.

- It should be short, easy to pronounce, and should not be offensive to member countries.

- The maximum length of the name will be eight letters.

- The proposed name should be provided along with its pronunciation and voice-over.

In a press release, the IMD said that a low-pressure area is very likely to form over the south-east Arabian Sea around 14 May morning and move north-northwestwards across the south-east Arabian Sea and adjoining Lakshadweep and intensify gradually. It may intensify into a cyclonic storm over the east-central Arabian Sea on 16 May and continue to move north- northwestwards. The cyclonic activity in the Arabian Sea will bring light thunderstorms and wind up to 30 to 40 kmph in coastal districts of Gujarat, including those in Saurashtra and the south Gujarat region, for the next two three days.

(The above story first appeared on LatestLY on May 13, 2021 12:02 PM IST. For more news and updates on politics, world, sports, entertainment and lifestyle, log on to our website latestly.com).