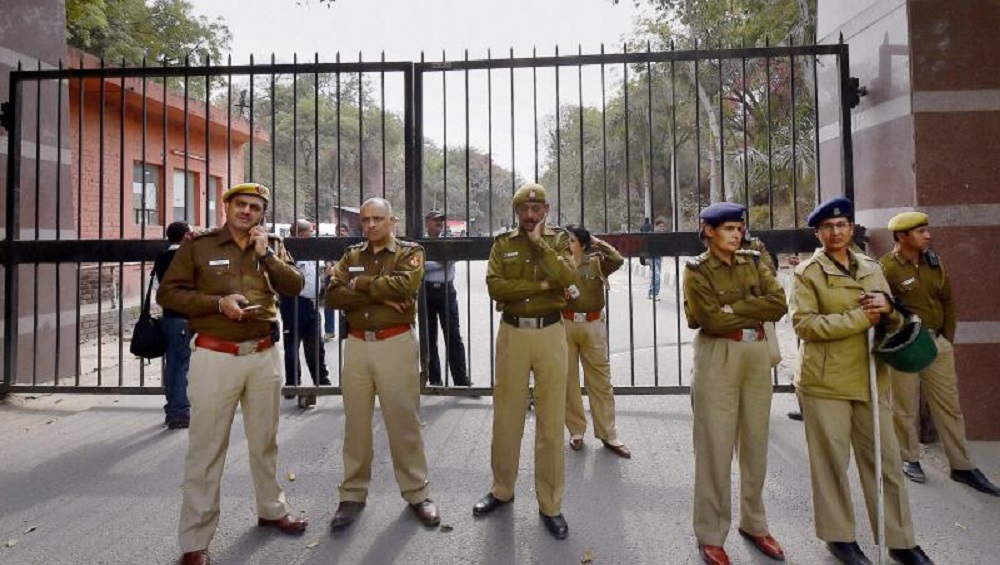 New Delhi, February 10: Tight security arrangements have been put in place at various centres across the national capital where the counting of votes polled in the high-stakes February 8 Delhi Assembly elections will take place on Tuesday. The curiosity among people to know the outcome of the elections to the 70-member Delhi Assembly has heightened post-exit polls, that has forecast a big win for the ruling AAP, and the delay in announcement of the final voter turnout by authorities.

The election, largely seen as a battle between the ruling Aam Aadmi Party and the BJP, which went aggressive during the high-octane campaign, was held on Saturday, sealing the fate of 672 candidates -- 593 men and 79 women.Nearly 24 hours after the polling ended in Delhi, the Election Commission on Sunday announced that the final voter turnout was 62.59 per cent, five per cent less than 2015, and asserted that it followed the laid down process to compile data, after the AAP questioned the "delay". Delhi Assembly Elections 2020: BJP Leader Kapil Mishra Says 'Won't Be Surprised if Arvind Kejriwal Loses from New Delhi Seat'.

Authorities in the Delhi CEO Office are gearing up for the counting of votes and adequate arrangements have been made at the centres spread across 21 location in the national capital, spanning 11 districts, officials said. The counting centres are located at CWG Sports Complex in East Delhi, NSIT Dwarka in West Delhi, Meerabai Institute of Technology and G B Pant Institute of Technology in Southeast Delhi, Sir CV Raman ITI, Dheerpur in Central Delhi, and Rajiv Gandhi Stadium in Bawana in North Delhi, among other places.

There will be 33 counting observers, officials said. There were 13,780 polling booths where every vote was accounted for by the presiding officers which is a time-consuming exercise, Sandeep Saxena, Senior Deputy Election Commissioner, said at a press conference on Sunday. Critical and vulnerable polling locations, numbered 545 and spanned 3,843 booths.

In view of the ongoing anti-citizenship law protest in Shaheen Bagh, the Delhi CEO's Office had put all five polling stations in the area under the "critical" category. Security personnel kept guard at strong rooms storing electronic voting machines (EVMs). Delhi Chief Electoral Officer Ranbir Singh, a day ahead of the polls, had said all EVMs have been tested and they are "foolproof and non-tamperable".  Delhi Assembly Election Results 2020 FAQs: When Will Counting of Votes Begin? How to Check Winners' List on ECI Website And Other Questions Answered.

Exit polls on Saturday predicted an easy win for the AAP, which sought to retain power on development plank, against the BJP that ran an aggressive campaign centred around the issues of anti-CAA protests and nationalism.

Most exit polls also predicted that Congress is unlikely to open its account even this time in Delhi, which it ruled from 1998-2013.

Looking to capture power after 22 years, the BJP had mounted one of the most aggressive campaigns in the Delhi Assembly polls, with Union Home Minister Amit Shah leading the saffron charge on its planks of Hindutva and nationalism, and its strident opposition to Shaheen Bagh protests.

The issue often dominated the political discourse during the campaign, with many BJP leaders targeting the ruling AAP, and the Congress, accusing them of "misleading people" holding anti-CAA protests in Delhi. A section of voters on Saturday claimed that the prolonged street agitation demanding revocation of the Citizenship Amendment Act (CAA) was "not an issue in the beginning of the campaign" but "political parties had slowly turned it into one".  Delhi Assembly Elections 2020: Congress Leader Kirti Azad Alleges Foul Play With EVMs by Amit Shah.

Ballimaran constituency recorded the highest voter turnout of 71.6 per cent among all the 70 assembly seats in the national capital, while Delhi Cantonment brought up the rear in polling percentage, according to data shared by officials on Sunday. Okhla constituency recorded 58.84 per cent. Shaheen Bagh and Jamia Nagar fall in Okhla assembly constituency, where hectic polling had taken place till late afternoon. Shaheen Bagh has been the epicentre of anti-CAA protests in Delhi, running into over 50 days now.

Protesters had taken turns on polling day on Saturday to cast votes to keep the agitation alive. Seelampur constituency recorded a turnout of 71.2 per cent, according to the data.