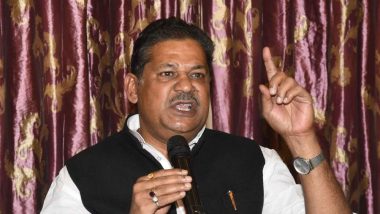 New Delhi, February 9: Congress leader Kirti Azad on Sunday claimed foul play in connection with electronic voting machines (EVMs), alleging that Home Minister Amit Shah is behind "this dirty game." "Photos and videos of foul play with the EVMs have surfaced. I think that Home Minister Amit Shah is the mastermind of this dirty game," Azad told ANI.

He also said that for the past couple of years, the exit polls did not turn out to be correct. "In the exit polls held earlier in Haryana, it was told the Congress would get three seats, but we got 31 seats. Similarly, in Rajasthan, MP, and Chhattisgarh, we were told the BJP will form the government but the Congress came to power. So, I have seen the exit polls failing. I have full confidence the Congress will get a good number of seats in Delhi," he added. Delhi Assembly Elections 2020: Manoj Tiwari Rejects Exit Polls, Predicts 48-Seat Win For BJP, Says 'EVM Must Not be Blamed'.

The Congress leader also said that Manoj Tiwari has the ability to do well in politics but he has to "mature."