The search-and-eliminate operations were re-initiated by the Indian forces after the Centre called an end to the unprecedented Ramzan ceasefire last week. 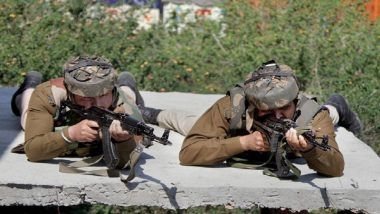 Srinagar, June 19: At least three militants were killed and one security force personnel was injured after an encounter erupted in Jammu & Kashmir's Pulwama on Tuesday.

The military operation was carried out in Tral region of Pulwama. The deceased have been identified as cadres of cross-border terror outfit Jaish-e-Muhammad (JeM). Their personal identity is yet to be revealed. The combing operation was underway by the time this report was first published.

The security personnel injured in the encounter was identified as a jawan of the Central Reserve Police Force (CRPF). The jawan has been evacuated to 92 Base Hospital. His condition is reported to be stable.

2 terrorists killed in an encounter with security forces in Pulwama's Tral. 1 CRPF personnel injured & has been evacuated to 92 Base Hospital. Operation underway. #JammuAndKashmir

The search-and-eliminate operations were re-initiated by the Indian forces after the Centre called an end to the unprecedented Ramzan ceasefire. In the first counter-terror operation launched by the forces on Monday, two militants were killed in Panar forest area of Bandipora.

While announcing the end of truce, the Centre cited the "aggressive" approach shown by militants throughout the month. Analysts claim the murder of Srinagar-based journalist Shujaat Bukhari on June 14 could be the trigger behind the move to end the ceasefire.

What further signals the hardline approach of the BJP-ruled Centre in J&K, the party has broken ranks with the Mehbooba Mufti-led PDP, bringing down the state government.

"Terrorism, violence and radicalisation have risen and fundamental rights of the citizens are under danger in the Kashmir Valley. Despite support from the Central government, PDP failed to control the situation," BJP leader Ram Madhav said while announcing the split on Tuesday.

(The above story first appeared on LatestLY on Jun 19, 2018 08:05 PM IST. For more news and updates on politics, world, sports, entertainment and lifestyle, log on to our website latestly.com).