First Passenger Train in India ran 165 Years ago, Here are Some Amazing Facts About the Indian Railways on its Anniversary

On the 165th anniversary of the first beginning of the train services, let us look at some of the facts of the Indian Railways 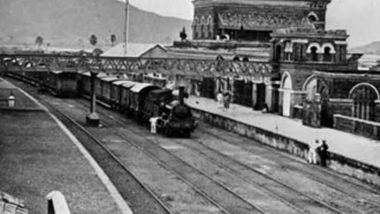 Its the 165th anniversary of first passenger train in India (Photo credits: Facebook)

Indian Railways can be rightly called the lifeline of transportation within the country. Today we have railways covering the longest and some of the remotest of destinations within the country. It is the fourth largest railway network in the world, size-wise. While we pride in having an efficient railway system, we must appreciate the first train journey which took place in the country. The first passenger train ran from Bori Bunder (Mumbai) to Thane on April, 16, 1853. Today marks the 165th anniversary of this first passenger train which was hauled by three steam engines, carried 400 people over a distance of 34 kilometers. It was operated by the Great Indian Peninsular Railway (GIPR).

After this first journey, developments began and the Mumbai-Thane line was extended to Kalyan. A first railway bridge was constructed over the Ulhas river, making it the first ever railway bridge in the country. The railway companies GIPR and East Indian Railway (EIR) pioneered the railway construction in the country.  Gradually passenger trains ran in the Eastern and Southern parts of the country. The Central, Southern, Western and Eastern zones were then created and more and more improvements like the installation of lights, fans and sleeping coaches were introduced.

On the 165th anniversary of the first beginning of the train services, let us look at some of the facts of the Indian Railways:

These facts are mind-blowing and show what makes the railways so very efficient and convenient mode of transport. The first plans for the proposal of railways were made in Madras in 1832 and actual running of the train took place on this day in 1853. A largest operating system run by one ministry, a stipulated budget to it every year and also continuous plans of development, Indian Railways is one of the prides of our country! With the railway employees celebrating this day, we too as passengers need to respect the services, despite all the glitches that we may have to face once in a while.

(The above story first appeared on LatestLY on Apr 16, 2018 11:03 AM IST. For more news and updates on politics, world, sports, entertainment and lifestyle, log on to our website latestly.com).