HD Kumaraswamy, who was sworn-in as the chief minister of Karnataka to table the confidence motion of majority in the legislative house. 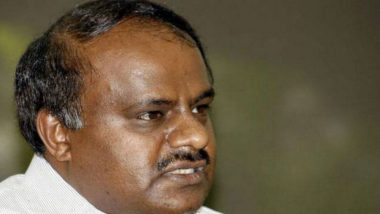 Mumbai, May 24: After successfully conquering the power in Karnataka state, the Congress-Janata Dal (Secular) coalition now finally have to go for a floor test tomorrow to prove their party majority in the legislative assembly, Vidhana Soudha Bengaluru. After a significant political turbulence, HD Kumaraswamy, who was sworn-in as the chief minister of Karnataka to table the confidence motion of majority in the legislative house.

The first session of the newly constituted 15th assembly has been convened at 12.15 p.m tomorrow; an intimation of the assembly meeting has been sent to all the MLAs. In addition to this, while tabling the motion in front of the speaker, it's also necessary that the proposal should get the support of 112 legislators, (required to form the government) to avoid any future controversy.

Sources said the election of the speaker and deputy speaker besides the floor test is also scheduled to take place on the same day tomorrow.

Karnataka state saw the second swearing-in ceremony of its state chief minister in less than a week's time after BJP State Party President B.S. Yeddyurappa resigned on floor test day in the assembly. BJP emerged as the single largest party with 104 MLAs, while Congress won 78 seats.

The assembly elections results threw a fractured mandate and a hung verdict on May 15 in Karnataka, with no party achieving a full majority. Therefore taking the opportunity, Congress declared its support with the JD(S) and staked their claim for government formation. To prove a full majority, the Congress also allowed the smaller party JD(S) to take the CM post, while it kept the Deputy CM post and speaker post.

(The above story first appeared on LatestLY on May 24, 2018 06:33 PM IST. For more news and updates on politics, world, sports, entertainment and lifestyle, log on to our website latestly.com).