Virat Kohli to Amitabh Bachchan, Now Celebrities Will Have to be More Careful in Endorsing Brands

It is expected to address the long standing problem of misleading endorsements and will also enable the creation of a powerful Central Consumer Protection Authority. 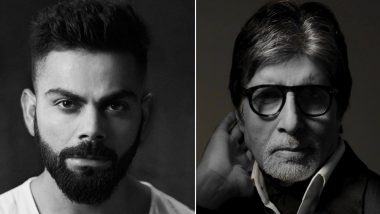 Lately, brand ambassadors have started coming under the scanner for promoting misleading ads in India. According to recent PTI reports, the Confederation of All India Traders (CAIT) in a letter to Consumer Affairs Minister Ram Vilas Paswan highlighted that Consumer Protection Bill should be taken on priority and must be passed in the current session of Parliament. The Bill has provisions designed to hold brand ambassadors liable for misleading endorsements.

It is expected to address the long standing problem of misleading endorsements and will also enable the creation of a powerful Central Consumer Protection Authority.

The Bill clearly states that any manufacturer or service provider, who puts up a false or misleading advertisement, will be punished with imprisonment of up to two years and fine of up to R.s 10 lakh. For every subsequent offence, the offender will be punished with imprisonment that may extend to five years and fine, which may extend to R.s 5 million.

According to reports, the Consumer Protection Bill, which was introduced in Lok Sabha on January 5, 2018, seeks to replace the existing Act of 1986 to address emerging consumer vulnerabilities. The Bill has been under discussion since 2015.

This is to be noted that Indian cricket captain Virat Kohli is the endorser of Punjab National Bank (PNB). Reportedly, the cricketer has made up his mind to not renew his endorsement contract with PNB, which has been rattled by a Rs 12,600-crore fraud. Last week, Priyanka Chopra terminated her contract as the global brand ambassador with brand Nirav Modi Jewels over allegations of the R.s 12,700 crore financial fraud. Previously, Amitabh Bachchan, Preity Zinta and Madhuri Dixit were questioned during the Maggi ban crisis which happened in 2015. In the following year, cricketer M S Dhoni resigned as brand ambassador of realty firm Amrapali, following a Twitter furore, where unhappy residents of a housing project in Noida launched a social media campaign asking the cricketer to dis-associate himself from the builder.

Last year, Advertising Standards Council of India (ASCI) had listed down rules for celebrity endorsements. The advertising body had said that celebrities should do their due diligence to ensure that all description, claims, comparisons made in the advertisements they endorse are not mislead or deceptive.

(The above story first appeared on LatestLY on Mar 06, 2018 05:15 PM IST. For more news and updates on politics, world, sports, entertainment and lifestyle, log on to our website latestly.com).