In a shocker to the ruling BJP, the JD(S) has decided to go along with the Congress to elect their mayoral candidate for the Kalburgi City Corporation in Karnataka, according to sources. 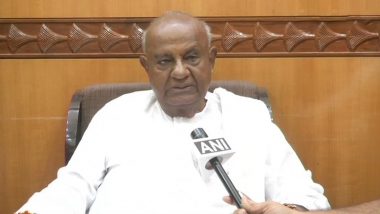 Bengaluru, Sep 11: In a shocker to the ruling BJP, the JD(S) has decided to go along with the Congress to elect their mayoral candidate for the Kalburgi City Corporation in Karnataka, according to sources.

As things play out, the JD(S) has called its elected members to Bengaluru and shifted them to a resort for the time being.

The opposition Congress has emerged as a single largest party, winning 27 seats in the house of 55 in Kalburgi City Corporation polls. The BJP has garnered 23 seats for the first time. While JD (S) bagged 4 seats and emerged as the kingmaker. An Independent candidate also won in the elections.

It was predicted that BJP would easily come to power with the help of JD (S). However, the party sources said that things have changed as the Opposition leader in Rajya Sabha, Mallikarjun Kharge personally spoke to the JD (S) supremo and former Prime Minister H.D.Deve Gowda.

The JD (S) has called for legislators meeting of the party on Monday. A decision on going with Congress will be announced after the meeting. Deve Gowda has advised his son former Chief Minister H.D. Kumaraswamy to hold his plans of supporting BJP in Kalburgi City Corporation, according to sources.

The decision of JD (S) to go with Congress has assumed importance as the party sources say it will set the tone for the alliance of Karnataka's regional party with the Congress for the next assembly elections in 2023. The expected alliance also points to a possible joint fight by JD (S) and Congress in the upcoming Zilla, Taluka Panchayat elections, as well as Bruhat Bengaluru Mahanagara Palike (BBMP) polls which are scheduled to be held soon.

Deve Gowda and Kumaraswamy have maintained that they will go as per the wishes of the representatives in public. Deve Gowda has mentioned that both Mallikarjun Kharge and Chief Minister Basavaraj Bommai have called on him seeking support of JD(S).

Ruling BJP MP Umesh Jadhav has already announced that BJP will elect its mayoral candidate. Holding the reins of Kalburgi has turned into an issue of prestige between Kharge and Bommai.

Fearing hijacking by the national parties BJP and Congress, the JD(S) has called its elected members to Bengaluru and shifted them to a resort.

(The above story first appeared on LatestLY on Sep 11, 2021 03:05 PM IST. For more news and updates on politics, world, sports, entertainment and lifestyle, log on to our website latestly.com).