In view of the COVID-19 pandemic, the traditional Lord Jagannath Rath Yatra encompassing 19 kilometres was taken out in Ahmedabad on Monday amid a curfew on the route with only five vehicles, including three chariots allowed. 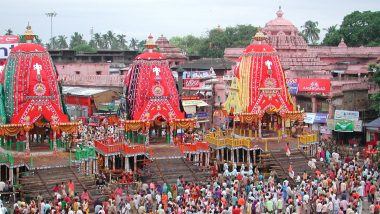 Gandhinagar, July 12: In view of the COVID-19 pandemic, the traditional Lord Jagannath Rath Yatra encompassing 19 kilometres was taken out in Ahmedabad on Monday amid a curfew on the route with only five vehicles, including three chariots allowed.

Before the annual Rath Yatra started, Union Home Minister Amit Shah performed the "Mangla Aarti" (auspicious ritual to pay obeisance to Lord) of the deities in the temple at 4 a.m.

The Rath Yatra is taken out every year on the auspicious day of Ashadhi Bij, the second day of Ashadh month, as per the Hindu calendar.

This was for the fifth time in a row that CM Rupani has carried out the Pahind ritual. The deputy Chief Minister Nitin Patel and the Gujarat Minister of Home, Pradeepsinh Jadeja were also present at the Lord Jagannath temple in Jamalpur.

"Due to the corona outbreak, this year's Rath Yatra has been planned following the COVID-19 protocols. After having a 'Darshan' of the Lord, I prayed that may the Lord free the country and state from the corona outbreak. We pray that things return to normalcy as soon as possible," the CM said.

The Gujarat CM also congratulated and greeted the Kutchi community who are celebrating the beginning of their New Year.

Looking at the current situation of corona times, the Gujarat government has decided to permit this year's conventional Ahmedabad Rath Yatra with a provision of curfew on route and ban on Prasad distribution and the yatra to be carried out in a limited way in place of the earlier giant processions.

Although the entire 19 kilometre route has been retained, the timings have been curtailed to finish the yatra in five hours. The yatra will end at 12.30 p.m. but the curfew on the route will continue til 2 p.m.

The Rath Yatra has been allowed with only five vehicles consisting of 'Nishan', 'Danka', three Raths of the Lord, brother Balram and sister Subhadra and the Mahant/Trustee's vehicle. The entire route was effected with a curfew imposed till the conclusion of the Yatra.

Khalasi youths, who conventionally pull the three Raths, were vaccinated and permitted only after RT-PCR negative results. A total of 60 youths have been permitted to pull the three chariots.

For the second time in its 144-year history, Ahmedabad's renowned event was held without the accompaniment of troupes, tableaux and public participation in view of the coronavirus outbreak. Last year too the Rath Yatra was allowed in a symbolic manner, where it only circumvented inside the temple premises.

Traditionally, the procession, led by chariots, would start early in the morning from the 400-year-old temple and return by late evening. It used to take a one-hour break at Saraspur for lunch.

Lakhs of people used to gather along the route on 'Ashadhi Beej' every year to catch a glimpse of the decorated elephants and tableaux moving around in some 100 trucks.

(The above story first appeared on LatestLY on Jul 12, 2021 12:34 PM IST. For more news and updates on politics, world, sports, entertainment and lifestyle, log on to our website latestly.com).