Over 700 goods-laden vehicles were stranded along the National Highway-2 (Imphal-Dimapur) on Monday amid the tense situation, as the blockade, called by the All-Tribal Student Union Manipur (ATSUM) since Friday, hit normal activities in the hill districts of Manipur, officials said. 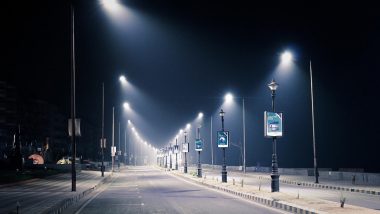 Imphal, Aug 8:  Over 700 goods-laden vehicles were stranded along the National Highway-2 (Imphal-Dimapur) on Monday amid the tense situation, as the blockade, called by the All-Tribal Student Union Manipur (ATSUM) since Friday, hit normal activities in the hill districts of Manipur, officials said.

According to the police, though a few incidents of arson, including setting a vehicle ablaze, have been reported on Saturday and Sunday, no untoward incident occurred on Monday. Manipur Opium Seizure: Police Arrest Rajasthan Man With 136.03 Kg of Narcotic Drug

"Security forces escorted 510 goods-laden vehicles to move to their destinations till Monday afternoon but over 7,000 vehicles, loaded with various essentials and other goods, are still stranded on the National Highway-2," a police official said.

The ATSUM called the �economic blockade' on Friday, demanding the Manipur (hill areas) Autonomous District Council (Amendment) Bill, 2021 be moved in the state Assembly to provide more administrative powers and autonomy to the tribal autonomous bodies.

The Manipur government, after holding marathon meetings on Sunday and Monday, has signed an agreement with the agitating ATSUM leaders.

Soon after the signing of the deal, the government released all five arrested ATSUM leaders, who were arrested on August 2 and remanded to 15-day judicial custody by the Chief Judicial Magistrate, Imphal West.

According to the agreement, signed by Manipur government represented by Tribal Affairs Minister Letpao Haokip, and Hill Areas Committee (HAC) chairman Dinganglung Gangmmei and three student leaders, the 7th Amendment Bill of Manipur Hill Areas District Councils for devolution of power of Autonomous District Councils has been referred to the HAC and the HAC will have consultation with all the stakeholders before recommending it to the Manipur Assembly.

Meanwhile, following the tension, the Manipur government had suspended mobile data (internet) services for five days in the entire state on Saturday.

The notification, issued by Special Secretary, Home, H. Gyan Prakash, quoting the Manipur Director General of Police, had said that in Bishnupur district, an incident occurred on Saturday along NH-2 wherein one van was found burning after being set ablaze by some youth.

The district magistrates of Bishnupur and Churachandpur have also imposed prohibitory orders under Section 144 of the CrPC for a period of two months across these districts.

The police said that since Friday, over 1,200 goods-laden trucks carrying essential commodities were stranded on National Highway-2, which connects Manipur with the rest of the country via Nagaland.

Around 30 tribal students were injured in Imphal on Saturday when the police prevented a protest rally leading to a clash between the two sides.

The BJP government headed by Chief Minister N. Biren Singh introduced the Manipur (Hill Areas) District Council 6th and 7th amendment bills in the Assembly on Tuesday. However, the ATSUM claimed that these bills are not in line with their demands.

The ATSUM has been agitating in the hill districts including Kangpokpi and Senapati for quite some time, demanding more power to the tribal autonomous district councils.

In August last year, the Hill Area Committee (HAC), comprising MLAs of all the 20 tribal reserved seats of Manipur, had recommended the new Autonomous District Council (ADC) Bill to ensure 'equitable development' in the hill districts in the same parameters as in the valley region of the state.

(The above story first appeared on LatestLY on Aug 08, 2022 11:54 PM IST. For more news and updates on politics, world, sports, entertainment and lifestyle, log on to our website latestly.com).