Martyr's Day 2021: Who Killed Mahatma Gandhi? Know All About The Assassination of Bapu by Nathuram Godse

India will observe the 73rd death anniversary of Mohandas Karamchand Gandhi, also known as Mahatma Gandhi. "Father of the Nation" Mahatma Gandhi was assassinated on January 30, 1948, by Hindu extremist Nathuram Godse in the compound of New Delhi's Birla House. 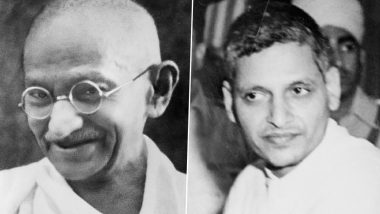 India is observing the 73rd death anniversary of Mohandas Karamchand Gandhi, also known as Mahatma Gandhi. "Father of the Nation" Mahatma Gandhi was assassinated on January 30, 1948, by Hindu extremist Nathuram Godse in the compound of New Delhi's Birla House. Mahatma Gandhi's last words from departing from this world were 'Hey Ram.'Nathuram Godse and his accomplice Narayan Apte were hanged to death in November, 1949. Nathuram Godse's Death Anniversary Observed by Hindu Mahasabha as 'Sacrifice Day'

Godse killed the Father of the Nation as he considered that Gandhi favoured the pollical demands of Muslims after the partition of India. Godse was the member of Hindu Mahasabha. His father Vinayak Vamanrao Godse, was a postal employee. After Bapu's assassination, the Hindu Mahasabha was vilified, and the Rashtriya Swayamsevak Sangh (RSS) was temporarily banned. Akhil Bharatiya Hindu Mahasabha Opens Library in the Name of Mahatma Gandhi's Assassin Nathuram Godse in Madhya Pradesh's Gwalior.

Who Was Nathuram Godse?

Nathuram Godse was born as Nathuram Vinayakrao Godse was born into a Maharashtrian Chitpavan Brahmin family. He attended the local school at Baramati through the fifth standard. Godse joined Hindu nationalist organisations –Rashtriya Swayamsevak Sangh and Hindu Mahasabha – after he dropped out of the high school. Godse formed his own organisation, "Hindu Rashtra Dal" on the Vijayadashami day of 1942. However, he continued to remain the member of the RSS and Hindu Mahasabha. Mahatma Gandhi Jayanti 2020: Here Are 11 Interesting Facts to Know About Mohandas Karamchand Gandhi, Father of The Nation.

Godse assassinated Mahatma Gandhi on January 30, 1948. He fired three bullets into Gandhi's chest and abdomen at point-blank range at the Birla House. Godse was captured by members of the crowd and handed over to the police. His murder trial in May 1948 in Delhi's historic Red Fort. Godse was the main defendant, and his collaborator Narayan Apte and six others were the co-defendants. Godse and Apte were sentenced to death on November 8 1949. They were hanged in the Ambala jail on November 15, 1949.

(The above story first appeared on LatestLY on Jan 29, 2021 11:44 PM IST. For more news and updates on politics, world, sports, entertainment and lifestyle, log on to our website latestly.com).