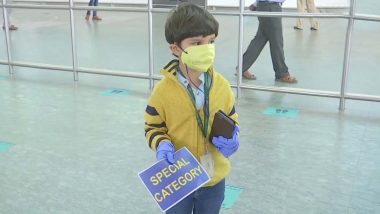 Bengaluru, May 25: A 5-year-old boy traveled alone from Delhi to Bengaluru  on Monday, the first day when domestic flights resumed services in India after a long gap of 2 months. According to a tweet by ANI, the little boy named  Vihaan Sharma united with his mother after a period of three months. On his arrival in Bengaluru, Vihaan was received by his mother at the  Kempegowda International Airport. "My 5-yr-old son Vihaan Sharma has travelled alone from Delhi,he has come back to Bengaluru after 3 months", his mother said.

Scores of passengers were seen at the Kempegowda International Airport in Bengaluru as domestic flight operations resumed on Monday. Till 9 am, there have been 5 arrivals and 17 departures and 9 flights cancelled, at the airport. Domestic Flights in India Resume Today After Two-Months Hiatus Amid COVID-19 Lockdown, Long Queues Seen at Airports, View Pics.

Karnataka:Passengers leave from Kempegowda International Airport in Bengaluru, as two flights have landed till now at the airport. A mother who came to receive her son says,"My 5-yr-old son Vihaan Sharma has travelled alone from Delhi,he has come back to Bengaluru after 3 months" pic.twitter.com/oAOsLCi7v9

As flight services resumed, passengers on several routes in India complained that their tickets were cancelled at the last minute without prior intimation from the airlines. A latest update by ANI stated that around 80 arrival/ departure flights from Delhi's IGI airport have been cancelled.

(The above story first appeared on LatestLY on May 25, 2020 11:06 AM IST. For more news and updates on politics, world, sports, entertainment and lifestyle, log on to our website latestly.com).