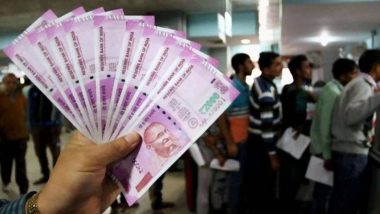 Over the last few months, the demand for long-pending DA arrears has been gaining momentum. Reports suggest that a a cabinet meet on 18-months DA arrears is likely to take place soon where the issue of DA arrears will be discussed. As per reports, central government employees are likely to receive their DA arrears in three instalments. However, there has been no official announcement from the government as yet. 7th Pay Commission Latest News Updates: Next DA Hike Likely To Be Announced in March 23, Implementation of 8th CPC Also on Cards.

If the Union Cabinet approves DA arrears, then the DA arrears of Level-3 employees will be around Rs 11,880 to Rs 37,554 while that of Level-13 or Level-14 employees will be between Rs 1,44,200 to Rs 2,18,200. However, DA arrears will only be passed if the negotiation works and the cabinet approves the same. 7th Pay Commission Good News: Central Government Employees Likely To Receive HRA Hike After DA, Check Latest Update.

In September 2022, the Centre increased the DA of government employees by 4 percent, thereby taking the DA to 38 percent from the previous 34 percent. Meanwhile, there are also questions as to when will government employees receive next DA hike. Reports suggest that the next DA hike could be announce in March 2023, which is about three months from now. Reportedly, a 3 to percent D hike is expected.

(The above story first appeared on LatestLY on Nov 30, 2022 01:29 PM IST. For more news and updates on politics, world, sports, entertainment and lifestyle, log on to our website latestly.com).