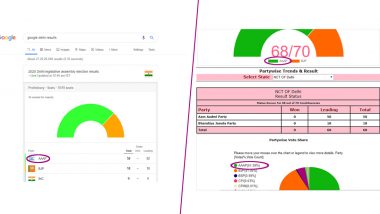 New Delhi, February 11: While the entire focus was on the counting of votes for the Delhi assembly elections results 2020, some observed that the Election Commission and search engine Google gave different abbreviation for the Aam Aadmi Party (AAP) than the usual one. Election Commission's portal for live results of the Delhi polls mentioned the AAP as "AAAP" at some places. Similarly, Google also mentioned Arvind Kejriwal's party as "AAAP". How To Check Delhi Assembly Elections Results 2020 And Winner Names Live on Election Commission Website results.eci.gov.in.

Reactions to Mentioning of Aam Aadmi Party as "AAAP":

The matter of an extra "A" was earlier raised by AAP legislator Somnath Bharti last year when the Election Commission mentioned Kejriwal's party as "AAAP". Questioning the poll panel, Bharti had tweeted: @ECISVEEP what's wrong with you? In results on your website, you are showing AAP as AAAP (sic)." Responding to Bharti's query, the EC had said: "It's the code allotted to AAP."

It's the code alloted to AAP.

Meanwhile, counting of votes for the Delhi results was underway in the national capital. According to numbers available till 10:45 am on the EC website, the AAP was leading on 50 seats, whereas the BJP was ahead in 18 constituencies. Congress couldn't secure the lead on any seat.

(The above story first appeared on LatestLY on Feb 11, 2020 11:25 AM IST. For more news and updates on politics, world, sports, entertainment and lifestyle, log on to our website latestly.com).