Aarogya Setu App Has Been Built by National Informatics Centre and IT Ministry Under PPE Model, Says MyGov

The Centre on Wednesday clarified that the Aarogya Setu app was developed with public-private collaboration. The central government found itself in the middle of the controversy after reports surfaced that Ministry of Electronics and the National Informatics Centre (NIC) denied having knowledge about the creation of the app. 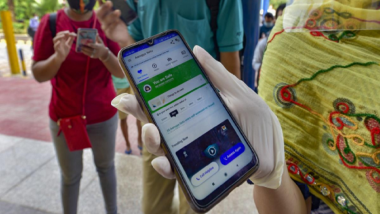 New Delhi, October 28: The Centre on Wednesday clarified that the Aarogya Setu app was developed with public-private collaboration. The central government found itself mired in a controversy after reports surfaced that Ministry of Electronics and the National Informatics Centre (NIC) denied having knowledge about the creation of the app. The Central Information Commission (CIC) also issued notice to the Centre over the matter. Who Created Aarogya Setu App? Electronics Ministry, NIC Have 'No Information', Top RTI Body Issues Showcause Notice.

Abhishek Singh, CEO of MyGov and Digital India Corporation clarified that the Aarogya Setu application National Informatics Centre and Information Technology Ministry made it along with the private partnership. Speaking to IANS, Singh clarified, "There is no confusion on who created the Aarogya Setu application as National Informatics Centre and Information Technology Ministry have made it along with private partnership. Our country's best minds have made the application."

The government will release the detail press release soon. Meanwhile, the IT Ministry also also clarified that the app was developed in the most transparent manner. The government claimed that the Arogya Setu app was built in a record time of around 21 days. The mobile application can be used for medical self-assessment and tracking of COVID-19 patients. Aarogya Setu app was launched on April 2, 2020. Aarogya Setu Now an Open Source App, Android Version Source Code Released Today.

The controversy erupted after one Saurav Das filed a complaint stating that the NIC, National E-Governance Division (NeGD) and Ministry of Electronics and Information Technology (MeitY) -- had failed to furnish information about the process of creation of Aarogya Setu App and other information relating to its creation. He submitted that the RTI was filed with the NIC, which stated that it "does not hold the information" relating to the app's creation, which is very surprising since it is the app's developer.

(The above story first appeared on LatestLY on Oct 28, 2020 07:52 PM IST. For more news and updates on politics, world, sports, entertainment and lifestyle, log on to our website latestly.com).