Union Budget for 2021-22 imposed a Rs 2.5 per litre Agri infra cess on petrol, Rs 4 on diesel. Sitharaman said that such cess would not affect consumers. In addition to this, an Agri infra cess of 2.5 percent on gold and silver were announced. 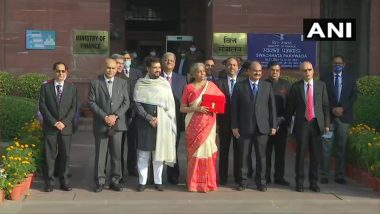 New Delhi, February 1: Union Budget for 2021-22 imposed Agriculture Infrastructure and Development Cess (AIDC) on several items. The government assured that customers would not have any additional burden due to the agri cess. Rs 2.5 per litre Agri cess has been on petrol, Rs 4 on diesel. Sitharaman said that such cess would not affect consumers. In addition to this, an Agri infra cess of 2.5 percent on gold and silver were announced. Fuel Price Hike After Budget 2021-22: Prices to Shoot up As Agriculture Infrastructure Cess Introduced of Rs 2.5 on Petrol, Rs 4 on Diesel.

The New agri infra cess to be applicable from February 2, 2021. The consumer does not have to pay anything extra as the prices will not be impacted. While talking about the agri-infra cess, Sitharaman said, "I propose AIDC on a small number of items. However, while applying this cess, we have taken care not to put an additional burden on consumers on most items."

Here's the list of commodities set for a price hike:

Finance minister Nirmala Sitharaman presented the Union budget today at a time when the country's economy is trying to recover from the impact of COVID-19. While making no changes to the tax slabs, FM Sitharaman brought some relief to senior citizens above 75 years. In her announcements, she mentioned that pensioners over 75 years of age are exempted from filing returns.

In a big relief for taxpayers, the time limit to reopen the assessment procedures under the Income Tax Act has been reduced from 6 years to 3 years, except in serious tax cases. She further announced a slew of measures on road infrastructure, railways, health and wellness and others.

(The above story first appeared on LatestLY on Feb 01, 2021 02:31 PM IST. For more news and updates on politics, world, sports, entertainment and lifestyle, log on to our website latestly.com).