Well-known journalist and writer, Anil Dharker, the Founder Director of the Mumbai International Literature Festival, has passed away, family sources said. He had been hospitalised for a heart ailment and he breathed his last here late Thursday. 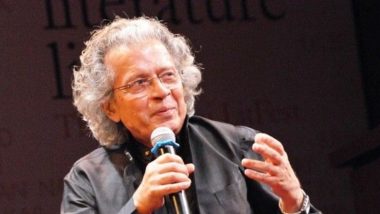 He had been hospitalised for a heart ailment and he breathed his last here late Thursday.

"Sad to hear about Anil Dharker's passing. He was briefly my editor at Independent, and represented an age when newspaper journalism used to be what it is meant to be," noted sports journalist Sambit Bal tweeted.

"Saddened by the news of @anildharker's passing. Fellow liberal, activist, author & journalist, Anil Dharker was an institution in Mumbai. He was also a dear friend & will be sorely missed," former Union Minister Milind Deora tweeted.

"Terrible new about @anildharker. He has been a big influence in Mumbai journalism and was an unfailingly kind man," writer," writer Meenal Baghel tweeted.

(The above story first appeared on LatestLY on Mar 26, 2021 11:41 AM IST. For more news and updates on politics, world, sports, entertainment and lifestyle, log on to our website latestly.com).