Amid the US-China trade war and the escalating tensions between the two economic superpowers, India has clinched the opportunity to take advantage. Confirming the report, a new smartphone user had tweeted an image on social media network Twitter showing that the iPhone XR has been "Made in India". 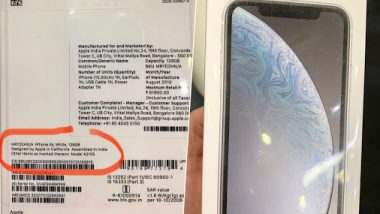 IPhone XR which is 'Made in India'. (Photo Credit: Twitter)

New Delhi, October 21: Amid the United States-China trade war and the escalating tensions between the two economic superpowers, India has clinched the opportunity to take the advantage. In the latest report, it has been revealed that global leader Apple.Inc has set up its manufacturing unit in India, and its latest smartphone iPhone XR is being produced in the country. Confirming the report, the tech and business journalist of Wall Street Journal -- Newley Purnell -- had tweeted an image on social media network Twitter showing that the iPhone XR has been "Made in India".

With India trying to boost its market and revive the slowing economy, the new development has given a sigh of relief to the Narendra Modi government -- attacked by the opposition and corporates from all sectors for failing to cope up with the global pace. A recent announcement by Union Finance Minister Nirmala Sithtraman has somewhat helped the foreign industrialists who saw India as a better option than China. Apple AirPods Pro With Noise Cancellation Might Be Launched This Month: Report.

A few days ago, Sitharaman stated in an interview with The Wall Street Journal, "India will be more attractive, particularly in the light of what is developing between the US and China." Adding more, the Union Minister even claimed that the government is working on a blueprint with which it would approach the global corporate giants and put forward to them as to why India is a far more preferable destination.

India's making a push to get Apple and other big brands to switch production here as risks of manufacturing in China rise with trade tensions. Most recent win: iPhone XR now being made in India for the local market. By @EricBellmanWSJ @rovingrajesh https://t.co/t6JAYfRO59 pic.twitter.com/XeJPkuTS7i

Sitharaman was of the opinion that India has the capacity to build ecosystem building, be it electronics, lithium-ion battery and any other semiconductors. Stating her opinion in front of the world press in Washinton, the Finance Minister said that India wants to create an ecosystem to invite the companies to tap the country’s market.

Apart from the US-China trade war, Indian government's decisions to slash the corporate rate tax, easing the documentation, cashless transactions and easing the options for land acquisitions are attracting the foreign companies to set up their manufacturing plants here. Even Union Ministry of Electronics and Information Technology Ravi Shankar Prasad had met corporate heads of 50 firms last month to discuss their needs. Apple.Inc was one of them. A year ago, Samsung Electronics Inc. opened its biggest facilities in the world in Gurgaon.

(The above story first appeared on LatestLY on Oct 22, 2019 12:19 AM IST. For more news and updates on politics, world, sports, entertainment and lifestyle, log on to our website latestly.com).