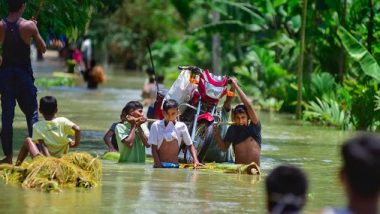 Guwahati, June 29: The flood situation in Assam continued to remain grim as incessant rains wreaked havoc in northeastern state since the past few days.  According to Assam State Disaster Management Authority (ASDMA), as many as 9,26,059 people have been affected in 23 districts due to the flood situation. The districts that have been badly affected by the floods in Assam are Dhemaji, Lakhimpur, Biswanath, Udalguri, Darrang, Nalbari, Barpeta, Bongaigaon, Kokrajhar, Dhubri, South Salmara, Goalpara, Kamrup, Morigaon, Hojai, Nagaon, Golaghat, Jorhat, Majuli, Sivasagar, Dibrugarh, Tinsukia and West Karbi Anglong districts.

The situation in the state on Sunday worsened with two more persons losing their lives in the deluge, the State Disaster Management Authority (ASDMA) said. In its daily flood update, the ASDMA informed that one person died at Jonai revenue circle of Dhemaji district and another at Udalguri revenue circle of Udalguri district due to flood. Assam Floods: Brahmaputra River Flows Above Danger Mark, Roads Washed Away, School Building Collapses Due to Heavy Rains; Watch Video.

According to reports, Barpeta is the worst-hit district where about 1.35 lakh people have been affected by the deluge. Barpeta is then followed by Dhemaji with almost one lakh people and Nalbari with more than 96,000 persons hit by this natural calamity. The ASDMA said that about 2,071 villages are under water and 68,806.73 hectares of crop areas have been damaged. Meanwhile, the flood has also affected 15,27,832 domestic animals and poultry across the state.

The Brahmaputra is flowing above the danger mark at Guwahati, Nimatighat in Jorhat, Tezpur in Sonitpur, Goalpara town in Goalpara and Dhubri town in Dhubri districts. Due to this, the embankments, roads, bridges, culverts and many other infrastructure have been damaged at various places.

In the wake of the flood situation in Assam, Home Minister spoke to Assam Chief Minister Sarbananda Sonowal and minister Himanta Biswa Sarma on Sunday and took stock of the alarming situation developing due to the rising water of the Brahmaputra.

(The above story first appeared on LatestLY on Jun 29, 2020 08:26 AM IST. For more news and updates on politics, world, sports, entertainment and lifestyle, log on to our website latestly.com).