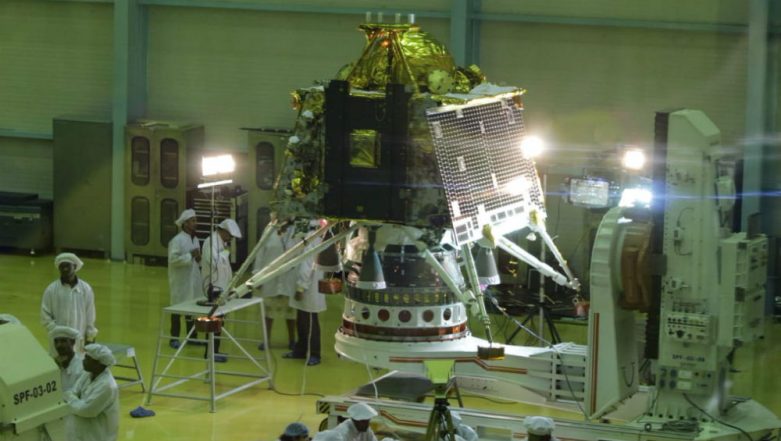 "The day we are going to land is either September 6 or September 7, that day happens to be the beginning of a lunar day. For one full lunar day, the lander and rover will be functioning and carry out scientific experiments," the ISRO chief added. Chandrayaan-2 Will Have 13 Payloads: ISRO.

The Rs 800-crore Chandrayaan-2, has three modules namely Orbiter, Lander (Vikram) and Rover (Pragyan). According to ISRO, Orbiter and Lander modules of Chandrayaan-2 will be interfaced mechanically and stacked together as an integrated module. The Rover is housed inside the Lander. Once launched into earthbound orbit by the rocket Geosynchronous Satellite Launch Vehicle (GSLV MK-III), the integrated module will reach the Moon orbit using Orbiter propulsion module.

Subsequently, Lander will separate from the Orbiter and soft land at the predetermined site close to the lunar South Pole, the ISRO said. Further, the Rover will roll out for carrying out scientific experiments on the lunar surface. Instruments are also mounted on Lander and Orbiter for carrying out scientific experiments, the space agency added. India to Launch Chandrayaan-2 in 2nd Week of July.

India launched its maiden moon mission Chandrayaan-1 on October 22, 2008, from its only spaceport at Sriharikota in Andhra Pradesh. Chandrayaan-2's lander has been named "Vikram" as a tribute to the pioneer of India's space programme and former ISRO chairman Vikram Sarabhai.

When Chandrayaan-2's rover lands on the Moon, India will become the fifth country in the world to achieve the feat after the Soviet Union in 1959, the US in 1969, China in December 2013, and Israel in 2019. (With agency inputs)