The Binance account of Mumbai's 'Crypto King' Makarand Pardeep Adivirkar has been frozen on request by the NCB. Adivirkar was arrested in June this year for his alleged involvement in purchasing LSD from darknet by using Bitcoins. 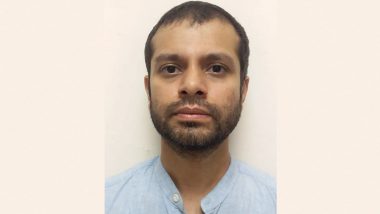 Mumbai, November 18: The account of a Mumbai-based accused in a drugs case has been frozen by cryptocurrency exchange Binance. According to a report by the Economic Times, the Narcotics Control Bureau (NCB) had requested the Cayman Islands-based cryptocurrency exchange to freeze the account of Makarand Pardeep Adivirkar over his alleged involvement in using cryptocurrencies to buy drugs in November 2020. Adivirkar, who is dubbed as the 'Crypto King' in Mumbai allegedly used Bitcoins to buy LSD last year from Darknet.

NCB had seized 20 LSD blots from Kharodi Village in Malad in November 2020. The seized drugs were brought from the Darknet by using the cryptocurrency, as per the NCB. While probing this matter, Adivirkar was arrested in June this year for his alleged involvement in providing the Bitcoin to effect the purchase of LSD from abroad. The accused was allegedly found providing Bitcoins to drug peddlers across Mumbai. Delhi: 3 Men Arrested With Marijuana Imported Through Dark Net.

"His modus operandi was to receive cash, and provide bitcoins on marginal profits by using his wallet that was used to purchase drugs from the Darknet," NCB had said in June, as was reported by news agency ANI. The recent development in the matter is that the NCB has managed to get Adivirkar's Binance account frozen. Sameer Wankhede, the Mumbai zonal head of NCB, told ET, "There is a thriving ecosystem of using both the bitcoins and darknet in illicit sale of contrabands. This is probably the first case in India where we have managed to freeze the account held by an exchange." Gujarat Drug Haul: ATS Seizes 120 Kg Drugs In Morbi District; 3 Arrested.

The Bureau had earlier said that drug peddlers and sellers of narcotic and psychotropic substances are using Bitcoin for illicit drug trafficking in some countries. LSD, ecstasy, heroin, hydroponic weeds, buds are especially being smuggled though this medium.

(The above story first appeared on LatestLY on Nov 18, 2021 06:03 PM IST. For more news and updates on politics, world, sports, entertainment and lifestyle, log on to our website latestly.com).