Under its impact, heavy rainfall would occur in some places of Kendrapada, Jagatsinghpur, Puri, Khordha, Ganjam, Nayagarh, Kandhamal and Cuttack districts. The coastal and south Odisha districts are very likely to experience heavy to very heavy rainfall for next two days. 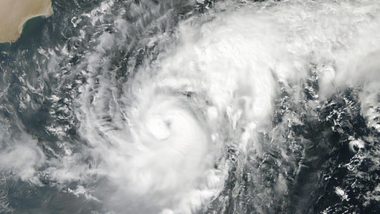 At 5.30 p.m. on Saturday, the cyclonic storm 'Gulab' lay centered about 370 km east-southeast of Gopalpur of Odisha and 440 km east of Kalingapatnam of Andhra Pradesh, it said. The cyclone is likely to move nearly westwards and cross north Andhra Pradesh - south Odisha coasts between Kalingapatnam and Gopalpur around Sunday evening.

Under its impact, heavy rainfall would occur in some places of Kendrapada, Jagatsinghpur, Puri, Khordha, Ganjam, Nayagarh, Kandhamal and Cuttack districts. The coastal and south Odisha districts are very likely to experience heavy to very heavy rainfall for next two days. Cyclone Update: NDRF Deploys 18 Teams in Andhra Pradesh, Odisha in View of Impending Cyclonic Storm in Bay of Bengal.

There may be damage to thatched huts, minor damage to power and communication lines due to breaking of branches and paddy crops, banana, papaya trees and orchards, it said.

As sea conditions would be rough, the fishermen are advised not to venture into the sea, along and off Odisha coasts northwest & adjoining west-central Bay of Bengal till September 27. Meanwhile, the Odisha government has asked the concerned district collectors to remain alert and take measures to counter the cyclone.

Special Relief Commissioner P.K. Jena said 42 ODRAF teams, 24 NDRF teams and 102 Fire Service teams will be deployed in seven districts which are likely to be most affected by the cyclonic storm. Cyclone Gulab, The Name Given by Pakistan, Brews in Bay of Bengal; Know What 'Gulab' Means.

He said the IMD has predicted that seven districts would experience less wind but heavy to very heavy rainfall on Sunday and Monday. Due to heavy rainfall, flash floods may occur in Rushikulya, Nagavali and Vamsadhara rivers and landslides in Gajapati and Rayagada districts and small trees may also be uprooted, Jena said.

"During 2018 Cyclone Titli, we witnessed landslides in Gajapati district. We have directed officials in Gajapati and Rayagada districts to take appropriate steps to deal with landslide incidents. Directions have also been issued to take steps for proper evacuation in areas which are prone to landslides," he added.

(The above story first appeared on LatestLY on Sep 25, 2021 09:05 PM IST. For more news and updates on politics, world, sports, entertainment and lifestyle, log on to our website latestly.com).