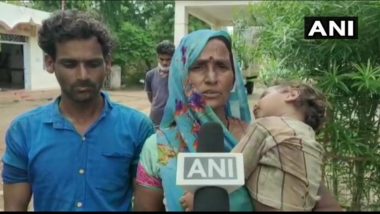 Guna (Madhya Pradesh), July 16: A day after Madhya Pradesh government announced that the Guna collector and the superintendent of police have been removed from their posts, mother of Guna Dalit farmer alleged that police assaulted her son. The Dalit farmer consumed poison to protest against an anti-encroachment drive in Guna.

Speaking to the media on the Guna incident, the mother of Dalit farmer said, as quoted by news agency ANI, "70 policemen came and asked us to vacate land saying it belongs to govt. We requested them to let us reap agriculture produce first. But they started abusing & beating us. My son took poison in anger but the police ignored. We admitted him to the hospital." Madhya Pradesh CM Shivraj Singh Chouhan Orders Immediate Removal of Guna District Collector and SP After Dalit Couple Consume Pesticide While Resisting Eviction, Video Goes Viral.

Here's what the mother of the Guna farmer said:

70 policemen came & asked us to vacate land saying it belongs to govt. We requested them to let us reap agriculture produce first. But they started abusing & beating us. My son took poison in anger but police ignored. We admitted him to hospital: Mother of victim in Guna incident pic.twitter.com/g8n1Ft4E2K

Earlier in the day, Congress leader Rahul Gandhi condemned the attack on Dalits by policemen in Madhya Pradesh's Guna district, saying "our fight is against this mindset and injustice". Following this, MP Minister Narottam Mishra hit back at the Congress leader stating that BJP government took swift action and removed Collector and SP.

According to the incident, a Dalit couple on Tuesday drank poison after the police allegedly tried to destroy their crop during an anti-encroachment drive. The administration claimed that the couple were cultivating their crop on government-owned land and wanted to vacate the land to build a college.

(The above story first appeared on LatestLY on Jul 16, 2020 03:07 PM IST. For more news and updates on politics, world, sports, entertainment and lifestyle, log on to our website latestly.com).