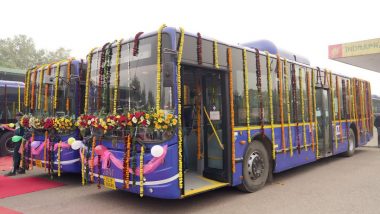 "We aim to bring in 2,000 electric buses in the coming years. Since 2011, not a single new bus had been procured by the DTC. This is the first new bus being added to its fleet in a decade. The public should also contribute to this war against pollution by switching their vehicles to electric," he said as he flagged off the bus from the Indraprastha depot.

The chief minister further said: "Today, the Delhi Government has dedicated the state's first electric bus to the public. This marks the beginning of a new-era in the transport sector of Delhi. In my understanding, now we'll see a revolution where as and when older buses are rolled out of service, new electric buses will be added. This is a very important step in combating the problem of pollution. This is a zero emission bus and there's barely any noise made by it." Delhi Cabinet Approves Proposal To Engage 300 Fully Electric Air-Conditioned Buses Under FAME Phase-II Scheme.

These state-of-the art buses are 100 per cent electric with zero tailpipe emissions. They are among the 300 electric buses that will be inducted under DTC. The total fleet of 300 buses will run from Mundela Kalan (100 buses), Rajghat (50) and Rohini Sector 37 (150 buses). These electric air conditioned buses have kneeling ramps for differently abled passengers, and special pink seats for women passengers. These buses are equipped with CCTV cameras, connected to a two-way Central Command and Control Centre (CCC) at Kashmere Gate, 10 panic buttons in each bus and a hooter.

"The bus can get charged within one to one-and-a-half hours on a fast charger. It can run for a minimum of one twenty kilometres in one charge. All our depots are being made electric charging friendly," Kejriwal added.

(The above story first appeared on LatestLY on Jan 17, 2022 04:46 PM IST. For more news and updates on politics, world, sports, entertainment and lifestyle, log on to our website latestly.com).