The Delhi Cabinet on Friday approved a proposal to engage 300 low-floor fully electric air-conditioned buses by the transport corporation under the "Faster Adoption and Manufacturing of Hybrid and Electric Vehicles in India (FAME) Phase-II" scheme. 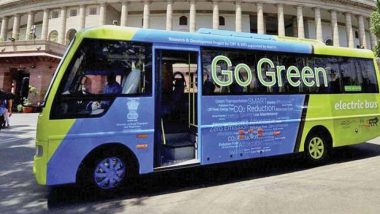 New Delhi, March 26: The Delhi Cabinet on Friday approved a proposal to engage 300 low-floor fully electric air-conditioned buses by the transport corporation under the "Faster Adoption and Manufacturing of Hybrid and Electric Vehicles in India (FAME) Phase-II" scheme.

According to officials, the initial tender called by the Delhi Transport Corporation (DTC) in October 2019 was not found responsive and therefore, the process was cancelled. A fresh tender called in June 2020 was also cancelled as the rates were not found competitive. The tender was called the third time in December 2020, which was found to be responsive and competitive, they said. Delhi Cabinet Approves 1,000 Electric Buses to Fight Air Pollution.

Under the scheme, the buses would be able to operate a minimum of 140 km in a single charge. The operator will provide the driver, while the DTC will depute its own conductor.

"The operator will be responsible for maintaining the buses or battery throughout the concession period of 10 years. The replacement of the battery will be the obligation of the operator which is generally done after five years. The cost of electricity consumption for the operation of these buses will be borne by DTC on actual buses up to an energy efficiency of 1.4 kwh/km.

The DTC will provide an electric connection up to the depot from the nearest grid. The operator will be free to use a fast or a slow charger but will have to operate the buses for at least 200 km per day, it said.

"Prototype of buses is likely to be received by DTC in June 2021. The first lot of 118 buses shall arrive in October 2021, while November will see the addition of 100 buses. Sixty buses will arrive in December, while the remaining 20 buses are likely to be received by January 2022. The buses shall be parked at the Subhash Place Depot, Mayapuri Depot, Rohini-II Depot, Rajghat-II Depot and Mundela Kalan Depot," the government said.

Meanwhile, the Dialogue and Development Commission of Delhi (DDC), in association with RMI India, organised a webinar as a part of the Switch Delhi EV mass awareness campaign -"Accelerating Electrification of Fleets in Delhi".

"Delhi EV policy provides the most favourable policy framework across India for commercial vehicles to transition to EVs - from financial incentives to low-interest loan financing to exemption from no-entry restrictions for plying on roads at peak hours. The Kejriwal government offers the most generous financial incentives across the range of electric vehicles that fleet companies use, making it much cheaper to run EVs as compared to CNG or petrol vehicles," Jasmine Shah, Vice Chairman of DDC, said.