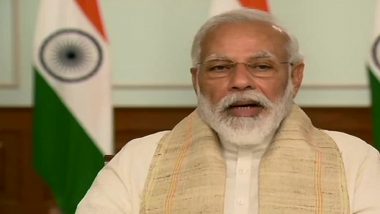 New Delhi, June 28: Prime Minister Narendra Modi gave a clarion call to citizens to use eco-friendly idols during Ganesh Chaturthi. "Preparations would have begun for Ganesh Chaturthi. Can we try this time to make eco-friendly Ganesh idols and worship them? Can we forgo the worship of such idols, which, after being immersed in rivers or ponds, become a hazard for the water and the living organisms in it? I firmly believe that you will respond to my call," the Prime Minister said in his monthly address to the nation on 'Mann Ki Baat' radio programme. He also requested people for promoting rainwater harvesting during the rainy season.

"Monsoon has now reached large parts of the country and meteorologists are very enthusiastic about the rains and are full of hope. If the rains are bountiful, our farmers will reap a bumper harvest and the environment will also be green. In the rainy season, nature also rejuvenates itself. As human beings exploit natural resources, nature in a way, during rains, replenishes and restocks them," the Prime Minister said. PV Narasimha Rao Birth Anniversary: PM Narendra Modi Remembers Former Prime Minister on Mann Ki Baat, Calls Him 'Great Son of India'.

"But, this refilling is possible only if we support our mother earth and carry out our responsibilities. A little effort by us helps nature and the environment quite significantly. Many of our countrymen are putting extraordinary efforts in this endeavour," he said.

The Prime Minister narrated the story of octagenarian Kamegowda from Karnataka's Mandavali and said he takes out his animals for grazing but at the same time he has taken it upon himself to build new ponds in his area. "He wants to overcome the problem of water scarcity in his area; therefore, in the work of water conservation, he is engaged in the work of constructing small ponds. You will be surprised that an octagenarian like Kamegowdaji, till now, has dug 16 ponds, through his hard work and the sweat of his brow. It is possible that the ponds he has constructed may not be very big but then his efforts are huge. Today, the entire area has got a new lease of life on account of these ponds," the Prime Minister said. Mann ki Baat: India-China Standoff, COVID-19 Crisis, Self-Reliant India, Here's What PM Narendra Modi Said on June 28, 2020 Radio Programme.

He said that the district administration and the local residents in Vadodara together organized an interesting campaign in which rainwater harvesting has been initiated in one thousand schools. "Consequently, it is estimated that, on average, about 100 million litres of water is being conserved annually," he said.