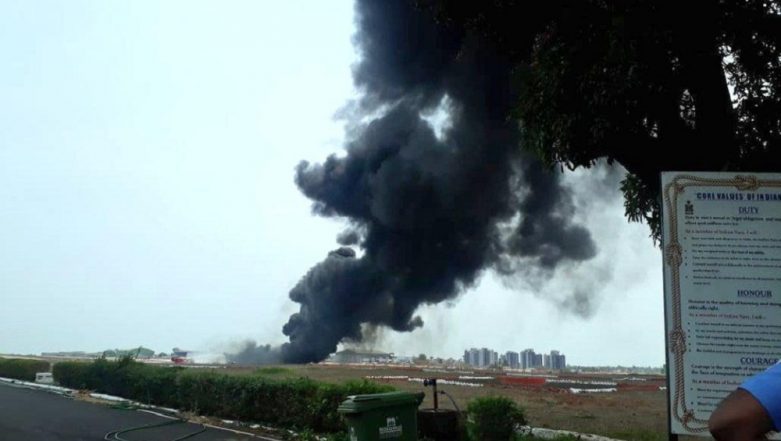 Visuals of the fire which broke out | (Photo Credits: Indian Navy)

Panaji, June 8: Flight operations were temporarily affected at the Goa Airport, following a fire which erupted on the runway. The blaze was caused after a MiG 29K fighter jet dropped its fuel tank during takeoff. No casualties were reported in the incident. The fighter aircraft has also not sustained any major damage, the spokesperson of Indian Navy tweeted.

According to the statement issued by the Indian Navy, immediate efforts were launched to douse off the flames and resume the normal movement of flights to and from the Goa Airport. Air India's AI 162 Flight Grounded For Two Days at Heathrow Airport Due to Technical Glitch, Passengers Stranded

The services at Goa Airport resumed nearly 40 minutes after being disrupted. Here is the latest statement issued by the Indian Navy:

Visuals of the Fire Which Broke Out at Around 2 PM:

Flash. #GoaAirport closed temporarily for a few hours view incident of fire caused by a drop tank of MiG 29K which got detached whilst taking off. All efforts in hand to resume flights ASAP. MiG 29K fighter ac is safe. @aaigoaairport @AAI_Official pic.twitter.com/5iDRT8r6BX

Notably, the Goa Airport based in Dabolim operates on a civil enclave in a military airbase named INS Hansa.

The terminal in Goa remains busy as scores of tourists continue to frequent the coastal state from India and across the world. Following the incident involving MiG 29K fighter jet, the Vistara Airlines announced that two if its flights - Delhi-bound and Mumbai-bound - have been delayed. They have been rescheduled post 5pm.