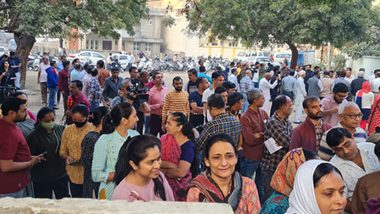 Gandhinagar, December 1:  Gujarat in its first phase of polling on Thursday recorded around 34.48 per cent voter turnout till 1 p.m. The polling was brisk to moderate in different places with the tribal areas of Dang, Tapi and Narmada recording an enthusiastic response than in the urban areas or other districts.

The Chief Electoral Officer of Gujarat in a statement stated that out of the total 26,269 ballot units, 0.1 per cent ballots units, meaning 31 ballots, were replaced. And, out of 25,430 control units, 29 control units were replaced after complaints of malfunctioning in the machines were reported till 1 p.m.

The Congress party's delegation led by state vice president Bimal Shah made a representation to the office of the Chief Electoral Officer about how the state machinery was misused, model code of conduct was being violated and ballot machines were not functioning smoothly. In the Rajkot district, senior elections officers caught a duplicate presiding officer from one of the booths in Dhoraji town, where instead of a female presiding officer, her husband had reported for duty. Gujarat Assembly Elections 2022 Phase 1 Polling: Cricketer Ravindra Jadeja Casts Vote in Jamnagar (See Pics).

AAP leader Gopal Italia alleged that in his Katargam constituency the voting process was going slow though there were long queues outside polling booths of voters. On Gondal seat, the Congress leaders alleged that BJP candidate Gayatriba Jadeja's husband Jayrajisinh Jadeja gave an interview to a local channel which is in violation of the model code of conduct.

Till 1 p.m., there was no report of any untoward incident in any part of Saurashtra, Kutch and South Gujarat region, where voting was going on 89 seats.

(The above story first appeared on LatestLY on Dec 01, 2022 02:28 PM IST. For more news and updates on politics, world, sports, entertainment and lifestyle, log on to our website latestly.com).