Tanveer was duped by his friend into marrying Mumtaz, twice his age, around two years ago. Soon, complications emerged in their relationship and Mumtaz allegedly tortured Tanveer regularly. 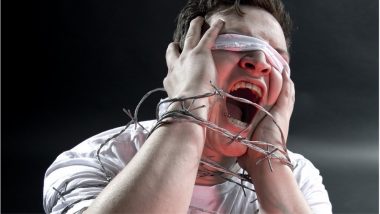 On Tuesday night, a shocking incident occurred with a man in Kolkata where his ears were cut off by his wife and his sisters. Victim Md Tanveer, 20, had to face the wrath of his wife, Mumtaz, 40. Tanveer was held at a gunpoint in Narkeldanga and his wife was assisted by her sisters in committing such a heinous act. Mumtaz and her sisters thought that Tanveer had died after the incident but he somehow managed to escape. The victim was rushed to NRS hospital by his family after they became aware of the incident, as reported in DNA.

According to reports, Tanveer was duped by his friend into marrying Mumtaz, twice his age, around two years ago. Soon, complications emerged in their relationship and Mumtaz allegedly tortured Tanveer regularly. Troubled Tanveer even tried eloping on several occasions but was brought back by Mumtaz's goons. Recalling a incident, Tanveer said he ran away to Mullickpur but he was forcefully brought back by Mumtaz and was brutally beaten by her and her sisters.

Tanveer lived with Mumtaz at her residence and was neither allowed to visit his native place nor meet his mother. To end the torture, Tanveer's mother had pleaded Mumtaz to let her son go. However, Mumtaz allegedly took a huge sum of money by selling Tanveer's home and continued torturing him. Tanveer, however, has no clear answer as to why he married Mumtaz. He merely says that a friend got him married to Mumtaz through clever means, where he was bound to do so.

Recollecting the incident, Tanveer said they cut off his ears at gunpoint and would have killed him if he resisted. The situation in the area became tensed once the news broke out in the locals. Later at night, Tanveer's family surrounded the police station accusing the cops for not filing an FIR and arresting the culprits. The police, however, claim that the accused are absconding and the case is being investigated.

(The above story first appeared on LatestLY on Jul 18, 2018 03:56 PM IST. For more news and updates on politics, world, sports, entertainment and lifestyle, log on to our website latestly.com).