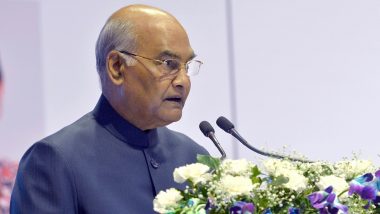 New Delhi: President Ram Nath Kovind will address the nation on Friday on the eve of 74th Independence Day, the Rashtrapati Bhavan said in a statement Thursday.

The address will be broadcast from 07:00 pm onwards on the entire national network of All India Radio (AIR) and over all Doordarshan channels in Hindi, followed by the English version, it said. Indian Independence Day 2020 Date, Theme And Significance: Know The History And 15th of August Celebrations Related to Swatantrata Diwas.

The broadcast of the address in Hindi and English on Doordarshan will be followed by broadcast in regional languages by regional channels of Doordarshan, the statement said.

"AIR will broadcast regional language versions at 2130 hrs on its respective regional networks," it added.

(The above story first appeared on LatestLY on Aug 13, 2020 10:47 PM IST. For more news and updates on politics, world, sports, entertainment and lifestyle, log on to our website latestly.com).