India has always been in favour of resolving disputes through diplomacy, External Affairs Minister S Jaishankar said on Friday during a meeting with his Russian counterpart Sergey Lavrov in New Delhi. 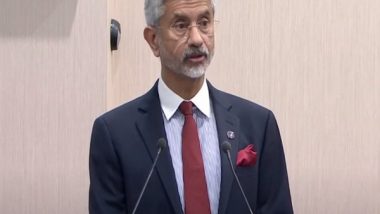 New Delhi, April 1: India has always been in favour of resolving disputes through diplomacy, External Affairs Minister S Jaishankar said on Friday during a meeting with his Russian counterpart Sergey Lavrov in New Delhi.

Lavrov arrived in India on Thursday on a two-day visit, during which he will hold talks over crude offer, rupee-ruble payment, ongoing arms deals and Russia's war in Ukraine.

In his opening remarks at the Hyderabad House, Jaishankar said: "Our bilateral relations have continued to grow in many areas and we have diversified our cooperation by expanding our agenda. Our meeting takes place in a difficult international environment quite apart from the pandemic. India has always been in favour of resolving disputes through diplomacy.

"In our meeting today we will have an opportunity to discuss contemporary issues and concerns in some details." Jaishankar also noted that 2022 is an "important year in our bilateral relations as we mark the 75th anniversary of the establishment of our diplomatic relations". "Despite the Covid related difficulties, last year turned out to be one of intense bilateral activity that included holding the inaugural 2+2 meeting and, of course, the 21st Annual Summit."

He further said that Prime Minister Narendra Modi and Russian President Vladimir Putin have been in "regular touch and have spoken to each other on multiple occasions this year". "Our bilateral relations has continued to grow in many areas and we have diversified our cooperation by expanding our agenda."

On his part, Lavrov said that "India and Russia have been developing strategic partnerships and this has been our priority. We certainly are interested in having the world order balance. We have intensified our bilateral context".

He also stated that "friendship" is a key word in India and Russia bilateral relations. "Our relationship has been very sustainable through difficult times in the past," he said, adding that Putin has sent his best regards to Modi

"These days our western colleagues would like to reduce any meaningful international issue to the crisis in Ukraine. We do not fight anything and we appreciated that India is taking this situation in the entirety of effect and not just one-sided way." CPI-M Rajya Sabha Member John Brittas Urges Government To Withdraw Hike in Price of Essential Drugs.

Since Moscow launched its invasion of Kiev on February 24, India has been facing pressure from the West and its allies to take a stronger stand against Russia.

Till date, India has remained neutral on seven Ukraine-related resolutions at the US.

(The above story first appeared on LatestLY on Apr 01, 2022 03:09 PM IST. For more news and updates on politics, world, sports, entertainment and lifestyle, log on to our website latestly.com).