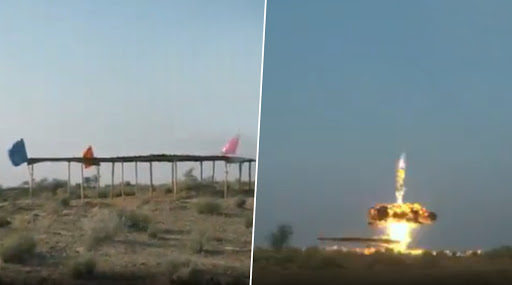 New Delhi, December 10: The Indian Army informed that it test-fired the United States origin precision-guided Excalibur ammunition from M-777 artillery howitzers in Pokhran firing range on Monday. With this new advanced weapon in the Indian side, the Army stated that the missile could penetrate 8-10 inches thick walls and reduces chances of collateral damage when used against the enemy.

Releasing a video of the test firing, the Indian Army informed that along with the Excalibur ammunition, precision-guided kit -- attached to M-777 artillery howitzers -- was also tested successfully. The Army added that these two new types of ammunition were fired for the first time to hime the army skill. Along with the M-777 artillery howitzers, the precision-guided kit has been procured from the US. ‘Make in India’ M777 Howitzer Guns To Be Inducted Into Indian Army By End of 2019.

It is to be known that the Indian Army had inducted the Excalibur ammunition from the US in October under the fast track procedure owing. The ammo can also be used for all the existing 155mm calibre artillery guns -- M777s, K-9 Vajra, Dhanush and Bofors -- in the army's inventory. As per the details, these Excalibur ammunitions provide accurate firing in all weather conditions.