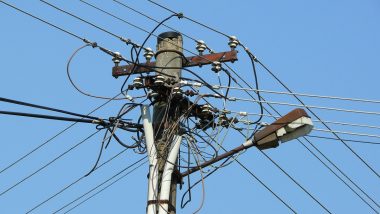 New Delhi, May 2: Power consumption in the country grew 13.6 per cent year-on-year to 132.98 billion units (BU) in April, showing the impact of the early onset of summers and spurt in economic activities, according to power ministry data.

The power consumption and demand were affected in April 2020 also due to the imposition of lockdown restrictions for curbing the spread of the deadly coronavirus. The power consumption in April 2019 (pre-pandemic period) was 110.11 billion units. Haryana Power Crisis: State Government To Get Additional Power From Other States To Meet Electricity Consumption.

The experts are of the view that power consumption and demand rose unprecedentedly mainly because of the early onset of summers and showed that greater economic activities are pushing commercial and industrial requirements of electricity in the country.

The third wave of the pandemic hit the country in January, which forced many states to impose local restrictions such as night and weekend curfews. They had also taken measures, such as banning dining in bars and restaurants. These restrictions were eased gradually by the states.

Experts opined that the power demand and consumption would show robust growth in the coming months as the states have lifted almost all local restrictions after a decline in the positivity rate.

Going ahead, the power consumption would surge with increased industrial and commercial activities after the easing of lockdown restrictions and due to the long spell of summers in the coming months, according to experts.