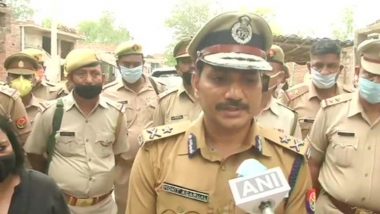 Kanpur, July 5: After gangster Vikas Dubey and his men killed eight policemen during an encounter in Kanpur on Friday, the Uttar Pradesh police are investigating their local officers to find who tipped off the criminals. Daya Shankar Agnihotri, a member of Vikas Dubey gang, also said on Sunday that the gangster knew cops were coming to arrest him. The station in-charge of Chaubepur, Vinay Tiwari, has already been suspended.

"All the workers of the local police station are under our scope of investigation on how Vikas Dubey got information about police movement. Whoever is found guilty will be charged with murder," Kanpur Inspector General Mohit Agarwal was quoted by news agency ANI as saying. Dubey's accomplice Daya Shankar Agnihotri earlier said that he was informed about the raid by someone from the police station. Vikas Dubey Should be Shot Dead by Police, Says UP Gangster's Mother; Condoles Policemen's Deaths in Kanpur Encounter.

"He (Vikas Dubey) received a phone call from the police station before the police came to arrest him. Following this, he called around 25-30 people. He fired bullets on police personnel. I was locked inside the house at the time of encounter, therefore, saw nothing," Daya Shankar Agnihotri said. ANI also quoted an operator of Kanpur's Shivli Power Sub-station, Chhatrapal Singh, saying on July 3, he received a phone call from Chaubeypur Power Station "to cut power in Bikaru village as a power line was damaged there".

On Saturday, the Uttar Pradesh police suspended Station Officer at the Chaubepur police station, Vinay Tiwari, reportedly over suspicion that he had tipped off gangster Vikas Dubey about the raid. Sources told IANS that Station Officer Vinay Tiwari had gone to Vikas Dubey's house on Wednesday following a complaint by Rahul Tiwari, who was beaten up by the gangster in the presence of the police officer.

Eight police personnel were shot dead and six policemen seriously injured in the encounter that broke out during the raid. The deceased included Bilhaur circle officer Devendra Kumar, who was leading the team, three sub-inspectors and four constables.

(The above story first appeared on LatestLY on Jul 05, 2020 03:00 PM IST. For more news and updates on politics, world, sports, entertainment and lifestyle, log on to our website latestly.com).