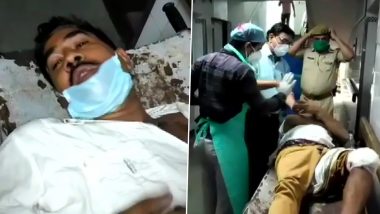 Kanpur, July 5: Gangster Vikas Dubey knew that policemen were coming to arrest him and was ready with his men to attack them, his accomplice Daya Shankar Agnihotri said on Sunday. Daya Shankar Agnihotri made the revelation after he was arrested by the Kanpur police following a brief encounter in Kalyanpur area on Sunday morning. Vikas Dubey and his gang members butchered eight Uttar Pradesh policemen when they had gone to arrest him on Friday. Kanpur Encounter: Chaubepur Station Officer Vinay Tiwari Suspended For Tipping Off Gangster Vikas Dubey.

He (Vikas Dubey) received a phone call from the police station before the police came to arrest him. Following this, he called around 25-30 ppl. He fired bullets on police personnel. I was locked inside the house at the time of encounter, therefore, saw nothing," Agnihotri was quoted by news agency ANI as saying. The 42-year-old criminal is one of the accused in the killing of eight policemen on Friday in Bikru village. Vikas Dubey Should be Shot Dead by Police, Says UP Gangster's Mother; Condoles Policemen's Deaths in Kanpur Encounter.

On Saturday, the Uttar Pradesh police suspended Station Officer at the Chaubepur police station, Vinay Tiwari, reportedly over suspicion that he had tipped off gangster Vikas Dubey about the raid. "In view of the allegations levelled against SO, he has been suspended and all the allegations are being thoroughly looked into," IG Kanpur Range Mohit Agarwal told reporters in Kanpur without specifying the nature of allegations.

Sources told IANS that Station Officer Vinay Tiwari had gone to Vikas Dubey's house on Wednesday following a complaint by Rahul Tiwari, who was beaten up by the gangster in the presence of the police officer. Eight police personnel were shot dead and six policemen seriously injured in the encounter that broke out during the raid. The deceased included Bilhaur circle officer Devendra Kumar, who was leading the team, three sub-inspectors and four constables.

(The above story first appeared on LatestLY on Jul 05, 2020 11:57 AM IST. For more news and updates on politics, world, sports, entertainment and lifestyle, log on to our website latestly.com).