Kargil Vijay Diwas celebrations are going on in full swing at Kargil War Memorial in Dras in Kargil District. s part of the celebrations, the Indian Army on Wednesday displayed weapons in Dras. Several stalls were set up to give detailed information about the new weapons. Officers were seen giving demonstrations to people 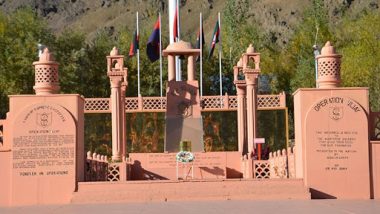 Drass, July 24: Kargil Vijay Diwas is celebrated every year on July 26 to commemorate the success of “Operation Vijay” which was conducted by the Indian Army to drag Pakistani Army backed infiltrators out of the Indian Territory. This year also preparations are going on in full swing at Kargil War Memorial in Dras in Jammu and Kashmir's Kargil District.  As part of the celebrations, the Indian Army on Wednesday displayed weapons in Dras. Kargil Vijay Diwas 2019: Know All About Kargil War of 1999 Fought Between India & Pakistan.

Several stalls were set up to give detailed information about the new weapons. Officers were seen giving demonstrations to people, thereby giving them an opportunity to be aware of the modernised military equipment and also to get the feel of it. Kargil Vijay Diwas 2019: Date And Significance of the Day to Commemorate the Sacrifices of the 1999 Kargil War Heroes.

Video of Preparations at War Memorial:

"We have displayed old as well as new weapons too. We have received 40 mm multi shot gun launcher from South Africa. We have also got a new laser range finder. With such new requirements we will able to monitor the activity of the enemies and also the will be able to find out their exact distance from us," said Bhupinder Singh, an Army officer. Indian Army personnel also gave demonstrations of a Bofors guns in Dras. Rajnath Singh to Visit Kargil Today on Kargil Vijay Diwas.

Meanwhile, the Border Security Force (BSF) personnel today organised a five-kilometre run in Jalandhar as part of week-long 'Kargil Vijay Diwas' celebrations. The Western Indian Naval command will also open its ships, INS Chennai and INS Mumbai for public on July 26 and 27. President Ram Nath Kovind will visit the war memorial in Dras on Friday to pay tributes to soldiers who laid down their lives in the 1999 Kargil War.

To celebrate the 20th anniversary of #KargilVijayDiwas , the Western Naval Command to open its ships, INS Chennai & INS Mumbai for public; School children can visit the ships on 26th (Friday) while general public will be allowed entry on 27th (Saturday)

The Kargil war was fought between May 3 and July 26, 1999, along the Line of Control (LoC). In the early May, an Army team led by Captain Saurabh Kalia went on patrol after receiving information of Pakistani infiltration. However, he and his men were captured by the Pakistani Army. The Indian Army then mobilised around two lakh soldiers to recapture the occupied posts. The Indian Air Force (IAF) also launched “Operation Safed Sagar” to help the ground forces.

In the war, the Indian Army lost 527 soldiers while Pakistan lost about 3,000 men including both soldiers of Pakistani Army and terrorists. The operation was declared success on July 26, 1999.

(The above story first appeared on LatestLY on Jul 24, 2019 08:30 PM IST. For more news and updates on politics, world, sports, entertainment and lifestyle, log on to our website latestly.com).