Karnataka assembly speaker, Vishweshwara Hegde Kaageri on Thursday suspended Congress MLA B. K. Sangamesh for one week for displaying 'indecent and disrespectful' behavior in the Assembly by taking off his shirt. 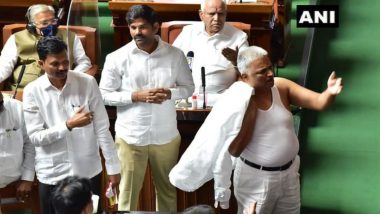 Bengaluru, March 4: Karnataka assembly speaker, Vishweshwara Hegde Kaageri on Thursday suspended Congress MLA B. K. Sangamesh for one week for displaying 'indecent and disrespectful' behavior in the Assembly by taking off his shirt.

Sangamesh, who won the Assembly seat from Bhadravati constituency in Shivamogga district, will not be allowed to enter the Legislature till March 12.

This incident took place when the Congress party was in front of the speaker to Oppose the ruling party's decision to take-up debate on - one nation one election - for two days starting from Thursday. Karnataka Congress MLC Prakash Rathod Caught 'Browsing Obscene Messages' in Vidhan Soudha; Clarifies Later.

However, Sangamesh had his own reasons to oppose in this manner alleging that ruling party BJP leaders were harassing his family members and him by filing false complaints against them.

Sangamesh protesting by removing his shirt was similar to a 2010 protest in which Goolihatti Shekhar a minister in Yediyurappa's cabinet ripped off his shirt in the Assembly and was disqualified.

Furious over the Sangamesh's way to protest, the speaker Kaageri adjourned the house soon after and suspended the MLA from Bhadravati, for a week.

Karnataka leader of the opposition, Siddaramaiah, described the 'One Nation, One Election' push as being part of the agenda of the Rashtriya Swayamsevak Sangh (RSS), the ideological mentor of the ruling BJP, as his party MLAs raised slogans against the issue.

The idea mooted by Prime Minister Narendra Modi after taking office in 2014, many BJP leaders have backed the proposal to hold all elections together, from Lok Sabha to state assemblies and local bodies, arguing that this will orient various elected bodies fully towards development as the current cycle of frequent polls across the country hampers work.

But Congress members decided to protest against the ruling party decision to hold two-day special session on - one nation one elections and trooped into the well in front of the speaker.

The moment, Sangmesh removed his shirt, KPCC president and Congress MLA J. N. Ganesh who rushed towards him made him wear his shirt besides covering him.

Taking serious note of this, Law and parliamentary affairs minister, Basavaraj Bommai moved a motion to seek suspension of MLA for his indecent and disrespectful behaviour inside the house.

Even as Siddaramiah came in support of Sangamesh, Kasageri shot back and said that unruly behaviour can not be tolerated in this house. "How can a leader of your stature defend him. This is not done, I am suspending him for a week," he pronounced his ruling.

After his suspension, an angry Sangmesh told reporters in the lobby that he will come to legislature regularly to seek justice from the ruling party. "It is clear that the BJP is letting its hooligans on me and my family. I need protection. Therefore I will continue to raise this issue. Speaker is acting in partisan manner in my case," he alleged.

(The above story first appeared on LatestLY on Mar 04, 2021 11:53 PM IST. For more news and updates on politics, world, sports, entertainment and lifestyle, log on to our website latestly.com).